Dr Chandrakant Mhaske, Dean of the hospital, however, said that they were asked to wait for the stretcher, but they chose to leave 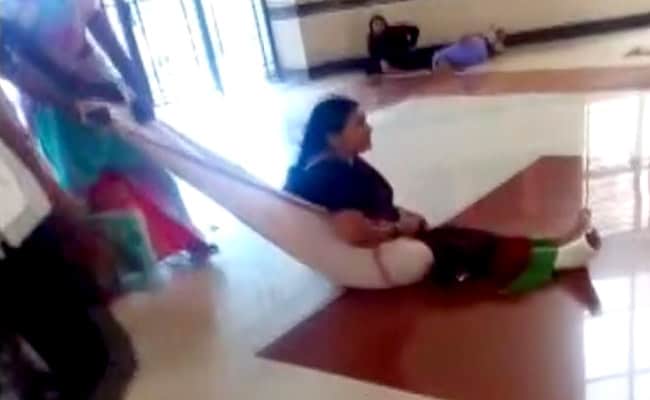 Two women dragged the patient on the floor using a dupatta tied to her waist.

A woman with a broken leg had to be dragged on the floor by her relatives allegedly due to the unavailability of a stretcher at a government hospital in Maharashtra. In a viral video of the incident, two women can be seen dragging the patient on the floor using a dupatta tied to her waist. Passersby, including doctors, hospital staff and others, don't bother to stop.

The management at Dr Shankarrao Chavan Government Medical College and Hospital in Nanded, about 55 km from Mumbai, drew flak for their lack of basic facilities.

Dr Chandrakant Mhaske, Dean of the hospital, however, said that they were asked to wait for the stretcher but they chose to leave.

"We didn't receive any complaint. However, ordered an inquiry into the incident. According to officials present there, the patient was told to wait as a stretcher was about to get free. But her relatives did not wait and took her," he told news agency ANI.

In a similar incident last year, an elderly woman had to drag her 75-year-old husband on the floor of a government hospital in Karnataka's Shivamogga. She was asked to take her husband for an X-ray, but wasn't given a stretcher or wheelchair at the Shivamogga Medical College.

Last month, at another hospital in Maharashtra's Aurangabad, a nine-year-old girl had to hold a bottle of saline for around half an hour as the hospital where her ailing father was admitted allegedly ran out of IV fluid stands.

A few months ago, doctors at a state-run medical college in Uttar Pradesh had amputated the leg of an accident victim and used it as a headrest to prop him up as a pillow was not available. It was only after his family bought a pillow and brought it to the hospital that the severed leg was removed.