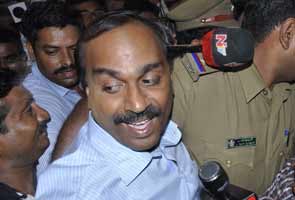 The Reddys will now be in the CBI's custody till September 19. Their interrogation will begin this afternoon. The court had deferred the hearing yesterday.

Janardhana Reddy was arrested earlier this month from his home in Bellary, and brought to Hyderabad, along with his brother-in-law. The former state minister is lodged in Chanchalguda Central Prison in Hyderabad.

The two men have been accused of illegal mining via their infamous company, Obulapuram Mining Company (OMC). Srinivas is the Managing Director of the company and Janardhana is a Director on its board. The CBI reportedly found Rs. 3 crore in cash and 30 kilos of gold from the former minister's palatial mansion.

Promoted
Listen to the latest songs, only on JioSaavn.com
Continuing its raids in the illegal mining scam, the CBI last week conducted searches at the residences of four close aides of Janardhana Reddy and seized several documents.