New Delhi: Ravindra Gaikwad, Shiv Sena parliamentarian, can now return to using planes. Air India has lifted its ban on him, imposed last month after the politician thrashed an Air India manager, bragging on camera "I hit him with my slipper 25 times." The end of the boycott comes after written instructions from the Civil Aviation Ministry to Air India.

The national carrier was supported by private airlines in blacklisting Mr Gaikwad. This morning, Air India said it had cancelled tickets booked by Mr Gaikwad for later this month. Since the ban was imposed, four journeys attempted by air by Mr Gaikwad were vetoed by airlines. A cabin crew union said it would not accommodate the politician till he apologises for the assault.

Yesterday, Mr Gaikward told the Lok Sabha that while he apologises to parliament if he has "hurt its image" with his actions, he will not apologise to the 60-year-old man he assaulted. He also claimed that he had been mocked and shoved by the manager and responded to those provocations. 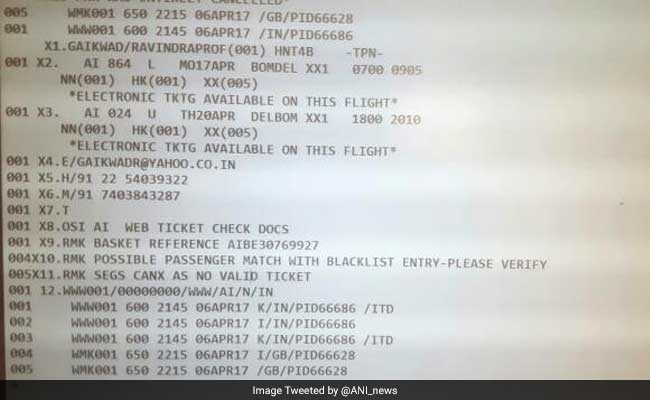 Ravindra Gaikwad's Air India ticket which was cancelled by the airlines today.

To get around the ban imposed on him by all airlines, Mr Gaikwad yesterday said in a note that he "regrets the unfortunate incident." The letter was given to Civil Aviation Minister Ashok Gajapathi Raju, who today said it had been accepted.

Promoted
Listen to the latest songs, only on JioSaavn.com
Yesterday, he had to be rushed out of the Lok Sabha to protect him from Sena minister Anant Geete who tore towards him in a fit of rage after Mr Raju that whether or not an MP was involved, the safety of passengers could not be compromised - a firm rebuke to Mr Gaikwad, whose party could not countenance that comment and responded characteristically with a string of threats which included warning that flights would not be able to take off from Mumbai. A Sena spokesperson asked, "Who does the CMD (top boss) of Air India think he is?"

Mr Gaikwad has accused Air India of poor service - he says his business class ticket from Pune to Delhi was not honoured. Except the flight operated as an all-economy journey. The MP says he had not been informed of this; the airline says he was. When the flight landed, Mr Gaikwad refused to disembark. A manager boarded the plane to reason with him, after which the lashing erupted.