Ratan Tata: Refused to pay a bribe to set up an airline 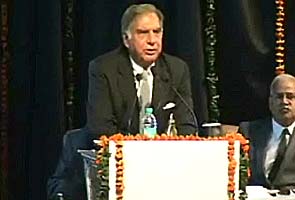 Dehra Dun: After his remarks sparked a massive controversy, Ratan Tata has clarified that he has not suggested that a minister demanded a 15-crore bribe from him when he wanted to launch a domestic airline.

In the late 1990s, Tata, who heads the Tata Group currently, tried to launch an airline in partnership with Singapore Airlines but said, "We went through three governments, three Prime Ministers and each time there was a particular individual who thwarted our efforts to form another airline."

Tata was delivering a lecture in Dehdradun today. He mentioned that during this time, he happened to be on a plane and "another industrialist who was sitting next to me said 'I don't understand... you people are very stupid... you know the minister wants 15 crores... why don't you pay it?' And I just said 'You can't understand it... I just want to go to bed at night... knowing that I haven't got the airline by paying for it.' And I can tell you I would have been feeling tremendously shameful had we got the airline and we had paid for it."

Tata's remarks led to reports - including on NDTV - that a minister had asked the Tata group for a bribe.

Later this evening, the Tata Group issued this statement. "No minister ever asked Mr Tata for a bribe. The fellow industrialist expressed his personal view point that some minister was asking for a bribe. Mr Tata in no way was in agreement to the fact that he was asked for bribe by any minister."

Addressing the issue of his stepping down as Chairman of the Tata Group, he said that he has not changed his mind about retiring in 2012.

Promoted
Listen to the latest songs, only on JioSaavn.com
"I don't want to change my deadline I set for my retirement. There are lots of sacrifices, one has to make in terms of personal life. I wanted my life back. I want to enjoy the things that I wanted to do," Tata said.

"I ferociously want to ensure that my successor has total commitment for ethics and values," he emphasised.