Right now, there are three Manouria Impressa in the Itanagar Zoo, out of which two are males and one female. The one rescued from Kakoi is a young male tortoise. 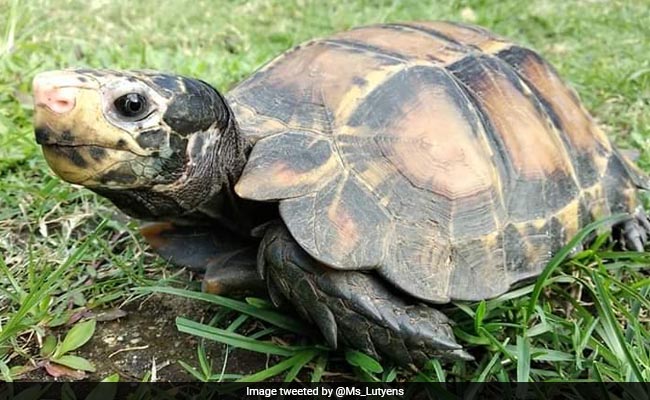 Manouria Impressa tortoise was first seen in June this year in Yazali under Lower Subansiri district.

Another species of "impressed" tortoise, also known as "Manouria impressa" has been sighted for the second time since its discovery in Arunachal Pradesh in June this year.

The tortoise is a young male, which was rescued by one Waru Nakong, a native of Kakoi. The rescued tortoise was handed over to Itanagar zoo on Friday.

"From the time I saw an earlier news report on the rescue of a tortoise, which was later handed over to the Itanagar zoo, I was concerned and told my father not to kill a tortoise if he happened to see one in future," Mr Nakong said.

The official said his father sighted the tortoise and informed him about it.

He said that, earlier the villagers used to kill the tortoise for food, but now he is hopeful that they will surely know its importance, as the one rescued is endangered species.

Range Forest Officer of Raga under Hapoli Forest Division, Bunty Tao has first discovered the rare species of the tortoise.

Right now, there are three Manouria Impressa in the Itanagar Zoo, out of which two are males and one female. The one rescued from Kakoi is a young male tortoise.

Because of the discovery of this rare species of tortoise in Arunachal, the International Union for Conservation of Nature (IUCN) has written a letter of appreciation to the State Forest Department, informed Tao.

The discovery of Manouria Impressa in June this year in Yazali under Lower Subansiri district has increased the total number to 29 species of non-marine chelonians and five recorded tortoises in the country.

According to an expert, the male is smaller than the female which is 30cm in length. This tortoise eats mushroom, cucumber, pumpkin along with few other selective food items, informed S C Paul, a forester in the Itanagar Biological Park.