Sarbananda Sonowal congratulated Ranjeet Kumar Dass and thanked him for motivating the party workers at the grassroots level. "Dass has played a crucial role in strengthening the party," he added. 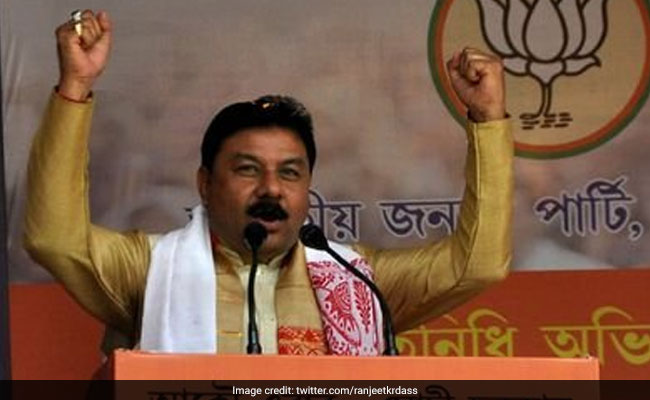 Ranjeet Kumar Dass was first elected as the party president on January 30, 2017 (File)

Assam BJP unit president Ranjeet Kumar Dass was re-elected to the post for a second consecutive term on Saturday.

The announcement was made at a party meeting held at the Srimanta Sankardeva Kalakshetra in Assam's Guwahati in presence of Chief Minister Sarbananda Sonowal and North East Democratic Alliance (NEDA) convenor and state minister Himanta Biswa Sarma.

Mr Dass has been elected as the party's state president for another three-year term.

The chief minister congratulated Mr Dass and thanked him for motivating the party workers at the grassroots level. "Dass has played a crucial role in strengthening the party," he added.

The NEDA convenor also congratulated Mr Dass on his re-election as the party's state president.

"Dass has infused a new energy in the party and I am certain that together we shall continue to take the BJP to greater heights," Mr Sarma said.

Mr Dass said he was grateful that the party workers had given him another chance to serve them.

"We shall work with renewed vigour and ensure that the BJP's mission of winning more than 100 seats in the 2021 assembly elections is achieved," he said.

The Assam Legislative Assembly has 126 seats.

Mr Dass was first elected as the party president on January 30, 2017.

He was re-elected from the Sorbhog constituency in 2016 assembly polls and was elected as the Speaker of the House.

Mr Dass had resigned from the Speaker's post on being elected as the party president.