Ram Jethmalani Dies: Ram Jethmalani had not been keeping well for the last few months, his son Mahesh said. His last rites will be performed this evening at the Lodhi road crematorium in Delhi.

Ram Jethmalani, one of India's well-known lawyers and a former union minister, died this morning at his home in Delhi. He was 95.

Mr Jethmalani had not been keeping well for the last few months, his son Mahesh told news agency PTI. The legal veteran died at 7:45 am. His last rites were performed this evening at 5.30pm at the Lodhi road crematorium in Delhi. Law minister Ravi Shankar Prasad and many other prominent people paid tributes to the lawyer at the cremation.

A six-time Rajya Sabha member, Ram Jethmalani served as a Union Minister in the United Front and the BJP-led NDA governments. In 2016, he was elected to the Rajya Sabha on RJD ticket.

The seasoned lawyer was elected to both the houses of parliament on the BJP ticket several times but he had a tumultuous relationship with the party. He was a minister in the Atal Bihari Vajpayee's cabinet in 1998 and then again in October 1999. However, he quit the Vajpayee government in July 2000.

In 2004, he contested against former prime minister Atal Bihari Vajpayee from Lucknow.

A legal fight between Ram Jethmalani and the BJP ended in 2018 - five years after he was expelled from the party for "breach of discipline" - after a mutual agreement.

The noted lawyer was involved in a number of high-profile cases and had defended several top politicians such as LK Advani, Lalu Prasad Yadav, J Jayalalithaaa and Arvind Kejriwal.

Born in Sindh, which is now in Pakistan, on September 14, 1923, Mr Jethmalani had obtained a law degree when he was just 17 and started practising law in Karachi until Partition, says his official website. "The partition led him to move to Bombay as a refugee and he began his life afresh with his family," it says.

In 2010, he was elected as the president of the Supreme Court Bar Association. One of the highest-paid lawyers, he announced his retirement from over seven-decade-long career as an advocate in 2017. He died six days before his 96th birthday.

"India has lost an exceptional lawyer and iconic public figure who made rich contributions both in the Court and Parliament," Prime Minister Narendra Modi wrote on Twitter, remembering the legal veteran. "He was witty, courageous and never shied away from boldly expressing himself on any subject," PM Modi said.

In another tweet, PM Modi said: "One of the best aspects of Shri Ram Jethmalani Ji was the ability to speak his mind. And, he did so without any fear. During the dark days of the Emergency, his fortitude and fight for public liberties will be remembered. Helping the needy was an integral part of his persona."

I consider myself fortunate to have got numerous opportunities to interact with Shri Ram Jethmalani Ji. In these sad moments, my condolences to his family, friends and many admirers. He may not be here but his pioneering work will live on! Om Shanti. 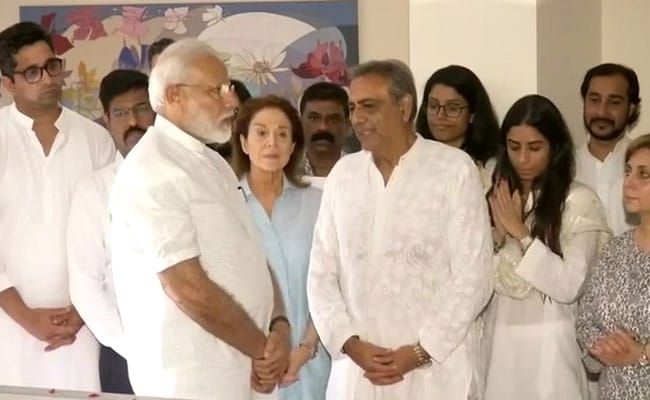 "Ram Jethmalani ji's passing away is a irreparable loss to the entire legal community. He will always be remembered for his vast knowledge on legal affairs. My condolences to the bereaved family. Om Shanti Shanti Shanti," Mr Shah wrote on Twitter. Mr Jethmalani was Amit Shah's lawyer in the Sohrabuddin Sheikh alleged fake encounter case.

Ram Jethmalani ji's passing away is a irreparable loss to the entire legal community. He will always be remembered for his vast knowledge on legal affairs. My condolences to the bereaved family. Om Shanti Shanti Shanti.

"Extremely saddened at the passing away of legendary lawyer Ram Jethmalani ji. An institution in himself, he shaped criminal law in post-independence India. His void would never be filled and his name will be written in golden words in legal history. RIP Ram sir," Mr Kejriwal wrote.

Besides Mahesh Jethmalani, who is also an eminent lawyer, the former Union minister is survived by his daughter based in the US. His other daughter, Rani Jethmalani, died in 2011.