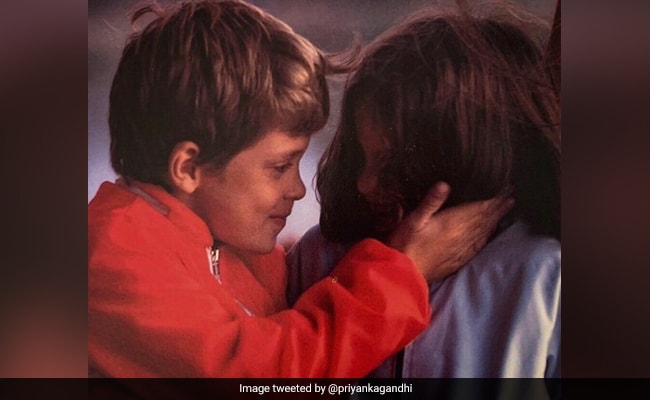 On the occasion of Raksha Bandhan, Priyanka Gandhi Vadra shared a cute picture of herself with Rahul Gandhi while describing him as the "best brother in the world".

The brother-sister duo have always been publically expressive of the love and the bond they share.

Priyanka Gandhi Vadra shared a throwback picture of the duo from their childhood.

@RahulGandhi I guess things haven't changed that much, haan?! ..best brother in the world! pic.twitter.com/rD3CrvHY8v

Rahul Gandhi is seen patting Priyanka Gandhi Vadra's cheek in one photograph and in the other picture, he is captured pouting as he looks at his sibling.

In April, posting a video of their meeting at Kanpur airport in Uttar Pradesh on Facebook, Mr Gandhi, former Congress president, wrote, "Was nice meeting Priyanka at Kanpur Airport! We're headed to different meetings in UP."

"Let me tell you what it means to be a good brother. What it means is that I am doing these massive long flights and I am going in a little helicopter squeezed up. And she is doing short flights and going in a big helicopter," he said in the video, with Priyanka Gandhi, a Congress general secretary, laughing and saying "that is not true".

Similarly, once during an interactive session with students in Pune on April 5, Mr Gandhi said that Ms Gandhi was his "best friend", adding that there can be no fight with her.

Talking about celebrating Raksha Bandhan, a festival that signifies the brother-sister bond, Mr Gandhi had said that he follows an uncommon rule and wears the ''rakhi'' (a protective thread tied on the right hand) until it breaks on its own.

"My sister is my best friend; we have been through life together so we are very close," he had said.