The new party will be floated next month, said both leaders, adding that a fourth front by coordinating with like-minded parties will be set up. 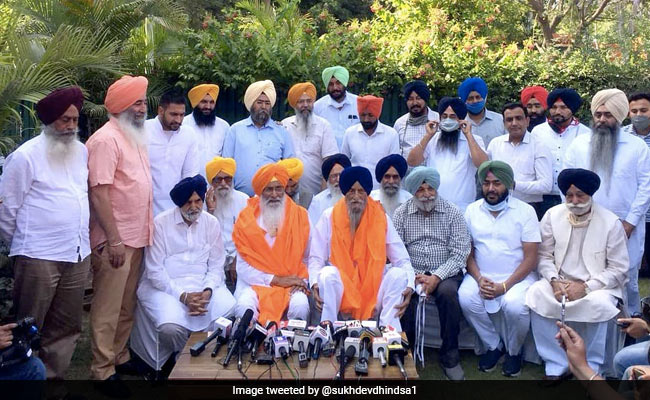 Rajya Sabha MP Sukhdev Singh Dhindsa and Ranjit Singh Brahmpura, who were expelled from the SAD for revolting against its leadership, on Monday announced to float a new party after dissolving their political outfits.

Mr Dhindsa leads the SAD (Democratic) while Mr Brahmpura is the president of SAD (Taksali), the factions set up by them after expulsion from the Shiromani Akali Dal (SAD) led by Sukhbir Singh Badal.

The decision to dissolve both parties was taken at a meeting of three members from the each outfit.

Making the announcement during a media briefing, Mr Dhindsa said, "People of Punjab wanted both the Akali Dals to join hands."

The new party will be floated next month, said both leaders, adding that a fourth front by coordinating with like-minded parties will be set up.

Mr Dhindsa said they will retain Shiromani Akali Dal in the party name while the suffix will be added later.

The development has come ahead of the Punjab Assembly polls, scheduled to be held next year.