Many politicians and former army veterans have objected to the new uniform, saying that it closely resembles the attire worn by military officers. 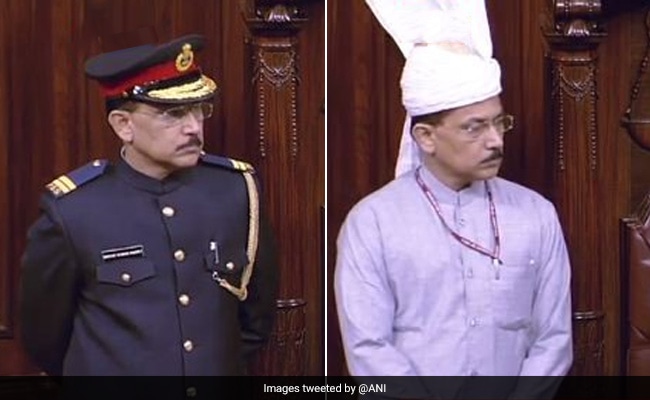 The new uniform, seen on the left, was criticised by politicians and Army veterans alike.

Marshals attended to proceedings in the Rajya Sabha without their military-styled caps today amid an ongoing review of their new uniform, which debuted on the opening day of the winter session. Vice President Venkaiah Naidu, who is also the Rajya Sabha chairman, had earlier asked the secretariat to reconsider the uniforms in view of criticism from certain quarters.

Many people, including former Army officers and opposition leaders, had objected when secretariat authorities changed the uniforms of marshals from a traditional Indian bandhgala with a turban to a military-like outfit comprising a navy blue blazer and a peaked cap. A few politicians, such as Congress MP Jairam Ramesh, even asked if "martial law" had been imposed in the Rajya Sabha.

Former Army Chief General VP Malik even termed the move as illegal. "Copying and wearing of military uniforms by non-military personnel is illegal and a security hazard. I hope @VPSecretariat, @RajyaSabha and @rajnathsinghji will take early action," he tweeted soon after photographs of the new-look marshals appeared. Union Minister VK Singh, who joined the BJP after serving as the 23rd Chief of the Army Staff, agreed with his contention.

Officials in the Rajya Sabha secretariat confirmed that the marshals were asked to not wear the peaked caps today in view of the ongoing review. "A new uniform will be designed. Instructions have been issued to the National Institute of Design, which conceptualises the attire, to ensure that it does not bear any resemblance to army wear," a source told NDTV.

However, the source claimed that nobody had initially found fault with the new uniform. "The marshals wore it first at an all-party meeting held at the Vice President's house. Nobody objected back then. In fact, some even complimented the new look," he said, adding that the attire was designed after a study of uniforms worn by marshals in various assemblies across the world.

The change in uniform was reportedly driven by the belief that Rajya Sabha marshals should have a distinct identity that separates them from the watch-and-ward staff in parliament. It was even suggested that the parliament should move on from the bandhgala-and-turban look, which is seen by some as a colonial legacy.

While marshals are summoned to maintain order or remove recalcitrant members in the Lok Sabha, the function of their Rajya Sabha counterparts is mostly ceremonial. They have to march before the chairman or the presiding officer of the house at the start of the proceedings. They also help with assisting the members with various tasks such as procuring documents.