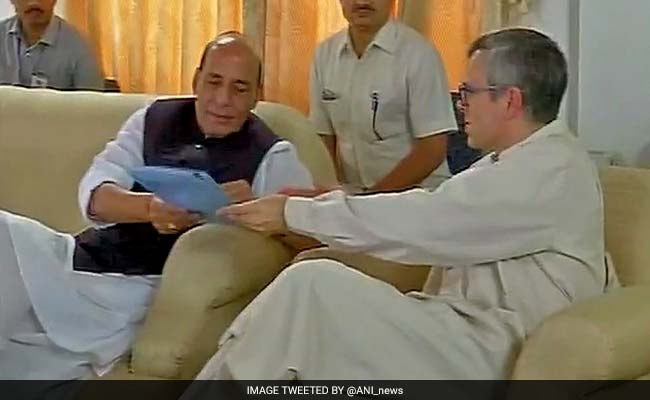 At least 46 people have died and thousands injured in violence sparked by the killing of 22-year-old terrorist Burhan Wani earlier this month.

A National Conference delegation headed by former chief minister Omar Abdullah had an hour-long meeting and submitted a memorandum to the Home Minister.

"We demanded an end to the excessive force used by security forces on protesters. We want curfew to be relaxed and mobile phones restored," said Mr Abdullah.

"Kashmir is a political problem and it needs a political solution. Unfortunately, centre tries to reach out to people of Kashmir only when Kashmir is on burning," he said.

Congress however boycotted meeting Home Minister. "We have already given our inputs and views to chief minister during all party meeting. Our central leadership has also expressed their views in the parliament. Unfortunately, government has not done anything to resolve the crisis," said GA Mir, president of the state's Congress unit.

Curfew remained in force in five districts of Kashmir and some parts of the summer capital as a precautionary measure as an uneasy calm prevailed in the Valley where normal life was paralysed for the 16th consecutive day today.