China's Defence Minister Wei Fenghe is also attending the SCO conclave but no bilateral meeting has yet been scheduled between Rajnath Singh and the Chinese leader. 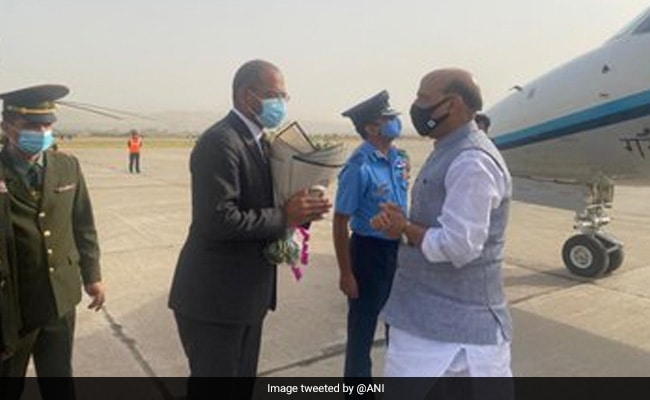 Defence Minister Rajnath Singh is expected to pitch for concerted efforts to deal with terrorism and other security challenges facing the region at a conclave of the Shanghai Cooperation Organisation (SCO) in Dushanbe on Wednesday.

China's Defence Minister Wei Fenghe is also attending the SCO conclave but no bilateral meeting has yet been scheduled between Mr Singh and the Chinese leader.

However, sources did not rule out the possibility of a meeting between Mr Singh and Wei on the sidelines of the conclave.

Mr Singh arrived in Dushanbe in Tajikistan on Tuesday evening to attend the meeting of the defence ministers of the member states of the SCO, an eight-nation influential grouping.

"In the annual meeting, defence cooperation issues among SCO member states are discussed and a communique is expected to be issued after the deliberations," it said.

External Affairs Minister S Jaishankar visited Dushanbe to attend a conclave of foreign ministers of the SCO states on July 14.

He held a one-hour-long bilateral meeting with Chinese foreign minister Wang Yi on the sidelines of the conclave.

In his address, officials said, Mr Singh is expected to delve into regional security challenges, including terrorism and ways to deal with them.

The defence minister is also expected to meet his Tajik counterpart Col Gen Sherali Mirzo to discuss bilateral as well as other issues of mutual interest.

Mr Singh and Wei had held bilateral talks in Moscow on September 4 last year on the sidelines of the annual meeting of the defence ministers of the SCO states.

It was the first highest-level face-to-face meeting between the two sides after the border standoff in eastern Ladakh erupted in early May.

Tajikistan is chairing the SCO this year and hosting a series of ministerial- and official-level meetings.

The SCO, seen as a counterweight to NATO, is an eight-member economic and security bloc and has emerged as one of the largest transregional international organisations.

SCO was founded at a summit in Shanghai in 2001 by the Presidents of Russia, China, Kyrgyz Republic, Kazakhstan, Tajikistan and Uzbekistan.

India was made an observer at the SCO in 2005 and has generally participated in the ministerial-level meetings of the grouping which focus mainly on security and economic cooperation in the Eurasian region.