The mas also refused to take cash awards from private organisations, saying the money should be given for the treatment of needy coronavirus patients. 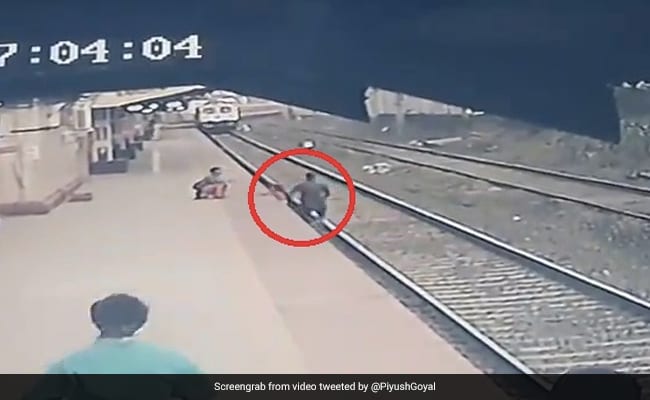 The railway ministry earlier this week announced an award of Rs 50,000 for Mr Shelke

Railway pointsman Mayur Shelke would be donating half the award money he has received to the family of a six-year-old child whom he rescued from the path of a speeding train.

He has also refused to take cash awards from private organisations, saying the money should be given for the treatment of needy coronavirus patients.

The railway ministry earlier this week announced an award of Rs 50,000 for Mr Shelke, a Central Railway employee.

He has decided to donate Rs 25,000 to ensure "bright future" for Sahil Shirsat, the boy, whose mother suffers from visual impairment.

"I learnt that the boy is from a poor background and they cannot afford to give him education. Since I saved the boy, I decided to donate half of the award money for his bright future," Mr Shelke told PTI.

In the heart-stopping incident that was captured on CCTV cameras and went viral on social media, Mr Shelke rescued the boy from the tracks at Vangani station near Mumbai on April 17.

As the boy, who was walking down the platform with his mother, fell onto the tracks, Mr Shelke jumped down, ran towards him and scooped him up onto platform before hauling himself up.

The heart-stopping video shows a speeding Udyan Express streaking past the same spot only a second later.

Mr Shelke, who joined the railways as a pointsman in 2016 after completing graduation, hails from a nearby village.

A corporate house gifted him a motorcycle after his daredevilry came to light. Some people and NGOs also sought to give him cash awards, but he refused to accept money, he said.

"People are going through a harrowing situation due to the coronavirus pandemic. So I requested them to give the money for the treatment of needy patients," Mr Shelke said.

Initially he had not informed his parents and wife about the incident, thinking it would unsettle them.

"When I saw CCTV footage myself, I couldn't believe that I had done it," he said, saying it all happened within 7-8 seconds.

"My parents felt proud, though they were a little worried, thinking what if something had happened to me," he said.

His wife asked him to think about the family, which also includes a new-born son, before taking such risks in future, Mr Shelke said.