Members of the Raigad building collapse rescue team and locals have praised excavator operator Kishore Bhagwat Lokhande as the "real hero" for working continuously for more than 30 hours. 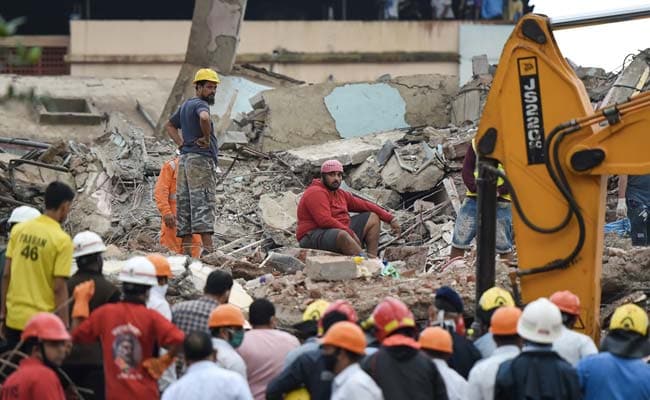 Raigad Building Collapse: Two people have been rescued and 15 bodies recovered from the debris.

The operator of a heavy-duty excavator, pressed into serve - first to rescue people and then to clear rubble - at the site of a building collapse in Maharashtra's Raigad, has earned rich praise from the authorities and locals for his "non-stop" work.

In fact, today, when the National Disaster Response Force and the fire department called off search for more people in Monday's building collapse after all the 17 missing people had been accounted for - 15 dead and two rescued - Kishore Bhagwat Lokhande was still hard at work.

A police officer called Mr Lokhande the "real hero who has been removing the debris for more than 30 hours".

"I got a call on Monday evening saying that I need to rush as a five-storey building has collapsed. I have been working continuously since then. I have only left the machine about four times - either to attend to nature's call or when some mediapersons wanted to click photos of me," said Mr Lokhande, who helped the rescue teams recover at least 10 bodies.

Asked if he didn't feel hungry, Mr Lokhande said the sight of a collapsed building, rubble and bodies had affected his appetite.

"A lot of people have died, but I was very happy when the rescue teams pulled out a four-year-old boy alive from under the debris... I ate two samosas on Tuesday afternoon and khichdi at night... I felt that instead of eating I could use that time in rescuing people," said Mr Lokhande, who hails from Marathwada's Beed district and had come to Mumbai a few years ago looking for work.

I have been operating these machines for six years now, the 24-year-old said.