Arun Jaitley said that "falsehood falls apart" and that the "overconfidence" of opposition leaders undermining the electorates' wisdom would not go unpunished in the Lok Sabha elections. 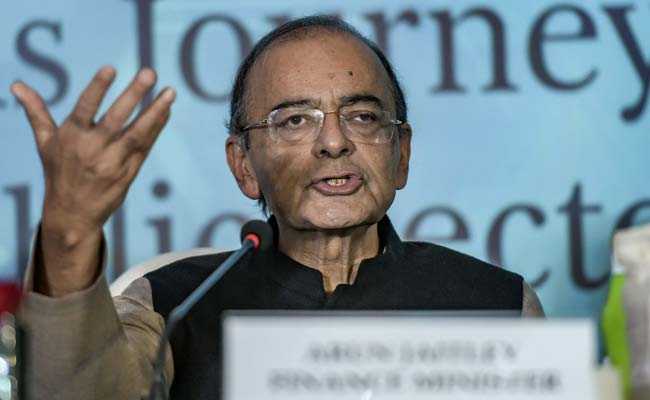 Accusing Congress and its President Rahul Gandhi of raising "manufactured issues" in their electoral campaign, Finance Minister Arun Jaitley on Saturday said if those "fake" issues were taken out of Mr Gandhi's speech, nothing will be left.

In a Facebook post, Mr Jaitley said that "falsehood falls apart" and that the "overconfidence" of opposition leaders undermining the electorates' wisdom would not go unpunished in the Lok Sabha elections.

"Rahul Gandhi has led not only his party but the entire opposition to rely on fake and manufactured issues. They raise fake issues, create an echo effect and then believe their falsehood to be true. It's time that they come out of the cocoon of falsehood or perish there," he said.

"Fake issues raised in Rafale, Balakot, Judge Loya's death, bank loan waiver, JNU issue, EVM, GST, demonetisation or Nirav Modi and Mallya, or be it the special status for Andhra Pradesh or the issues of economy, every time fakery and manufactured issues of opposition fell apart...If fake issues are taken out of Rahul Gandhi's speech, nothing will perhaps be left," he said.

"Poll campaigners must know that a campaign of fake issues never works...The real strength of Indian democracy is the inherent wisdom of the voters. They punish non-performers and they vote back those who deliver. Pollsters, political pandits and commentators usually go wrong," he added.

Mr Jaitley said the National Democratic Alliance (NDA) government was led by a leader with whom the comfort level of the voters was high and hence the opposition was in a state of panic with its "negative" single point programme -- "remove one man".

"The level of their ambition is limited. Indian voters have huge potential to distinguish between truth and falsehood and they prefer fairness. Political leaders are over-confident of their wisdom. Little do they realise that the electorate is wiser than them. Voters are capable of punishing those who resort to falsehood," he said.

Expressing confidence that the Bharatiya Janata Party under Prime Minister Narendra Modi would get a clear mandate in the upcoming Lok Sabha polls, Mr Jaitley said unlike many western democracies, a sizeable section of India's population was not permanently politically affiliated and their vote preferences varied from election to election.

He said that hung Assemblies and Parliament are predicted only in opinion polls and since the voter is far more decisive, he endeavours to elect a government with a clear mandate with the front-runner getting more seats than predicted.

In a point-by-point rebuttal of the opposition's electoral issues, Mr Jaitley rejected its contention that a costlier Rafale was purchased by the present government while giving favours to a domestic industrialist violating procedures.

He said both the Supreme Court and the Comptroller and Auditor General (CAG) cleared the deal, rejecting all contentions of the opposition.

On the criticism that the BJP was politicising the terror attack in Pulwama and the Indian Air Force (IAF) strikes at Balakot in Pakistan, and its demand that evidence of what happened at Balakot should be placed in the public domain, Mr Jaitley said the Indian armed forces consider it "not in the interest of national security and military discipline that the details of military operations should be placed in public domain."

On the opposition's allegations of waiving loans worth Rs 2.5 lakh crore of 15 industrialists, he reiterated that "not one rupee of loan has been waived" and in fact, the present government through its new Insolvency and Bankruptcy Code had recovered almost Rs 3 lakh crore worth of non-performing assets (NPAs) in the last two years.

Mr Jaitley also rejected the opposition's charge of electronic voting machines (EVMs) being tampered with, saying there "was a problem with the political losers."

"It is the same machine with which the Congress party won the recent Assembly elections."

On the Goods and Services Tax (GST), which the opposition has labelled as "a disaster", the Finance Minister said all the opposition parties had supported it and it was a part of the Congress manifesto.

"The opposition alleges that demonetisation was a failure which caused tremendous hardship to the poor people. Demonetisation caused hardship only to the holders of black money. It helped in formalising the economy... It hastened the digitisation of the Indian economy. India today collects more taxes at lower rates and uses them for the benefit of the poor," he said.

On the charge that Nirav Modi and Vijay Mallya were helped by the BJP government, Mr Jaitley said that their crimes were committed when the United Progressive Alliance (UPA) was in power and it was the BJP government which was trying to bring them to justice.

"Nobody who frauds India can escape," he said.

On the issue of jobs, he said India was the fastest growing economy in the world and its multiplier effect on jobs was very large.