His fresh Twitter attack comes days after the chief ministers of six non-BJP-ruled states wrote to the centre to remind it of its "constitutional" responsibilities in the stand-off over the Rs 2.35 lakh crore shortfall in GST compensation. 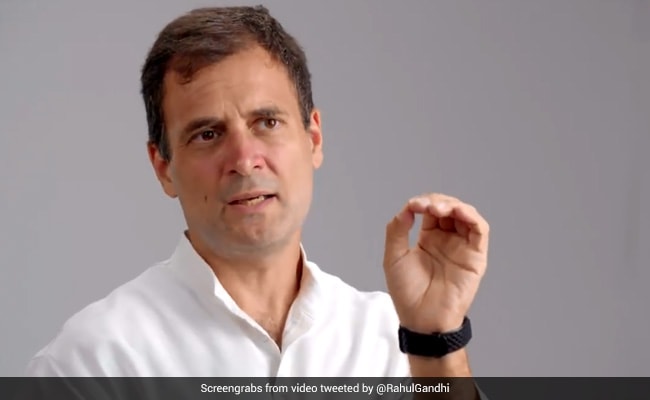 Rahul Gandhi tweeted a fresh video to attack the government.

Congress leader Rahul Gandhi this morning tweeted a fresh video to attack the government as he blamed the ruling BJP for a record 23.9 per cent contraction in the economy, linking it with the controversy over the Goods and Services Tax (GST).

"Another big reason for record GDP contraction is Modi government's Gabbar Singh Tax (GST). Many have been badly affected by this- lakhs of poor families, crores lost their jobs, states' economy was affected," the 50-year-old ex-Congress chief wrote today in a tweet.

In a video, which he shared in the post, Mr Gandhi is heard saying: "GST was the second biggest attack on the unorganised sector. GST was UPA's idea- one tax, intended to simplify the system. NDA's GST was different- four different types of tax slabs, up to 28 per cent tax, it has become complicated. Small enterprises cannot pay this amount. These four slabs are only meant to help the privileged, the country's most powerful businessmen in the country."

"NDA's GST has left states at receiving end. Centre is not able to pay the states. The GST is not just a failure, it's an attack on poor," he further stresses in the clip. Earlier this week, Rahul Gandhi had said in a video message that "demonetsation, GST and (coronavirus) lockdown"  were the three moves by the BJP government that attacked the unorganised sector.

His fresh Twitter attack comes days after the chief ministers of six non-BJP-ruled states wrote to the centre to remind it of its "constitutional" responsibilities in the stand-off over the Rs 2.35 lakh crore shortfall in GST compensation. West Bengal Chief Minister Mamata Banerjee, in the letter, said the the "GST imbroglio" amounted to a "betrayal" of trust.

She reminded Prime Minister Narendra Modi that "... in December 2013... sole reason why BJP was opposing GST... was because it did not trust then government of India in honouring GST compensation to states.

Mr Gandhi, the Congress MP from Kerala's Wayanad, has been posting tweets almost everyday over the last few weeks to target the government over its handling of the pandemic, the national economy, among other issues.

The BJP, however, has often dismissed these attacks. The massive shortall in the GST has been linked to the cornavirus pandemic, a situation that was recently described as "an act of God" by Finance Minister Nirmala Sitharaman.