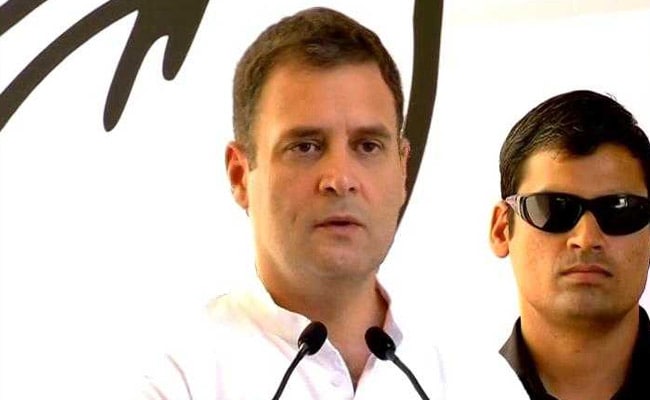 The Congress today released its manifesto for the Lok Sabha polls, making a slew of promises, including giving Rs 72,000 each to five crore poor families under the ''Nyay'' scheme, filling up 22 lakh government vacancies, bringing a separate budget for farmers and fixing a single moderate GST rate. The 55-page document titled ''Hum Nibhayenge'' (We will deliver) focused on addressing the issues of joblessness, farm distress, safety of women and boosting the rural economy, with stress on building a narrative on "real issues" faced by people. The manifesto was released by party president Rahul Gandhi, former prime minister Manmohan Singh, UPA chairperson Sonia Gandhi and senior leader P Chidambaram among others.

Here are the highlights from the press conference where Rahul Gandhi released Congress's election manifesto:

Rahul Gandhi says Congress manifesto proposes to make loan default by farmers a civil offence instead of criminal one pic.twitter.com/GpNw5XtK5R

There are no jobs, PM failed: Rahul Gandhi

"If a farmer is unable to repay his loan, it will be a civil offence and not a criminal offence": Rahul Gandhi on Congress manifesto #ElectionsWithNDTV#LokSabhaElections2019pic.twitter.com/Y377sJvQHy

Apr 02, 2019 12:52 (IST)
And I am very happy to see how this manifesto has been made. Everyone contributed greatly, and I thank them all, Says Rahul Gandhi
The Nyay Scheme: PM said he would give Rs 15 lakh in every bank account and we all know that was a lie. We took that and I said what can we do to put as much money in the poorest people's bank accounts. And we arrived at the figure of Rs 72,000 per year.... Rs 3,60,000 in 5 years. This will go directly to their accounts. And this will help remonetize what Mr Modi had demonetized.
Jobs: The youth are not getting jobs in India. Modi ji promised 2 crore jobs and that was a lie. We have come up with an actionable plan to create jobs. There are 10 lakh possible jobs at the gram panchayat level and we will deliver on it. Unlike Make in India, which is a bureaucratic process and involves bribes, we will, for entrepreneurs too, Mr Gandhi has spoken about his party's plan to ensure that "anyone would be able to start their business without any permits or clearances, and also get a tax holiday for the first three years. We will also increase jobs under MGNREGA.
Farmers: We see that the rich and industrialists get away with bank loan defaults, but the farmers go to jail. We have decided that farm loan default, in case they cannot pay back, will no longer be a criminal offence.
Apr 02, 2019 12:44 (IST)
Everything In Manifesto Is Truthful, Says Congress President Rahul Gandhi
Apr 02, 2019 12:41 (IST)

"All sections of society taken care of. Duty of the Congress workers to take the message of the manifesto to the people at large": Manmohan Singh

Apr 02, 2019 12:31 (IST)
Manifesto Concerns Our Farmers, Youth, Dalits
Apr 02, 2019 12:29 (IST)
Congress Releases 2019 Manifesto
Congress MP Rajeev Gowda says, "Rahul Gandhi said he wanted something different this time in mainfesto, he said go out and listen to people of India and reflect it in manifesto. We took our mission very seriously, this manifesto reflects the ideas and hopes of people of India We reached out to people in over 121 consultations across the nation and 53 closed-door consultations which spanned over 20 states and uniton territories. People were very happy that they were approached for making the manifesto."
Apr 02, 2019 12:27 (IST)
Congress spokesperson Randeep Surjewala says, "Today is a historic day. Today's Congress manifesto will help to make a strong and developed India."