Rahul Gandhi has accused Prime Minister Narendra Modi of "surrendering" Indian land to China and "lying" about the border standoff. 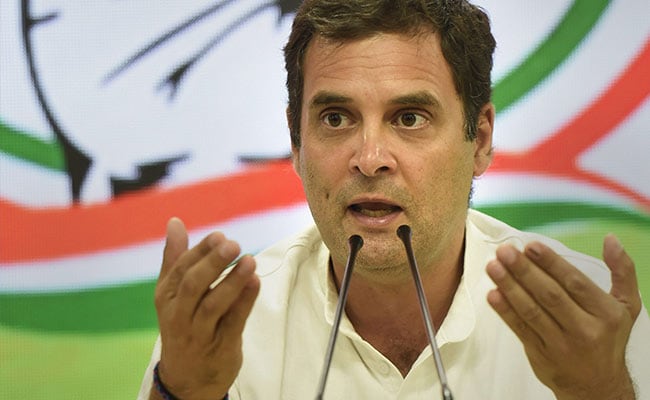 Rahul Gandhi has stepped up his attack on PM Modi over the Ladakh clash. (File)

As Prime Minister Narendra Modi flew into Ladakh on Friday to deliver a message to China weeks after a clash left 20 Indian soldiers dead, he faced a renewed attack from Congress leader Rahul Gandhi who questioned the PM's statement over Chinese intrusion.

While the people of the Himalayan region claim that China has taken their land, the PM says otherwise and someone is "lying", Rahul Gandhi tweeted. He tweeted a video of residents of Ladakh accusing China of occupying Indian territory in the region.

PM says:
Nobody took our land.

Obviously, someone is lying. pic.twitter.com/kWNQQhjlY7

The former Congress chief's dig came on a day when PM Modi visited Nimu in Leh to meet personnel of the Army, Air Force and Indo-Tibetan Border Police (ITBP), days after a violent face-off between Indian and Chinese troops in eastern Ladakh.

Accompanied by Chief of Defence Staff General Bipin Rawat, the Prime Minister reached Leh around 9.30 am. Under pressure to respond to Chinese aggression, PM Modi had said after the clash last month that the Chinese were not occupying any Indian territory or posts.

"The age of expansionism is over, this is the age of development. History is witness that expansionist forces have either lost or were forced to turn back," the Prime Minister said on Friday, not mentioning China. Addressing troops, he said: "The weak can never accomplish peace, the brave do."

Rahul Gandhi has been scaling up his campaign against the government with near-daily attacks since Indian soldiers died in a violent face-off with Chinese forces along the Line of Actual Control in Ladakh on June 15.

Mr Gandhi has accused the Prime Minister of "surrendering" Indian land to China and "lying" about the border standoff.

The BJP has brushed off the attacks, with party chief JP Nadda saying, "A dynast throws tantrums and his courtiers peddle a fake narrative... The nation is united and supportive of our armed forces. This is the time for unity and solidarity. Relaunch of 'the scion' for the nth time can wait."