Haryana Assembly Elections 2019: Election In Haryana: As an alternate mode of travel was being arranged for Rahul Gandhi, the former Congress president decided to swing the bat with the locals at the college where he landed.

Congress leader Rahul Gandhi on Friday indulged in a small game of cricket after a helicopter carrying him could not land in Delhi due to bad weather and had to be redirected to Haryana's Rewari, about 100 kilometres away. Mr Gandhi was on his way back to Delhi from Haryana's Mahendragarh, where he addressed a rally for Monday's state elections.

As an alternate mode of travel was being arranged for Rahul Gandhi, the former Congress president decided to swing the bat with the locals at the college where he landed. 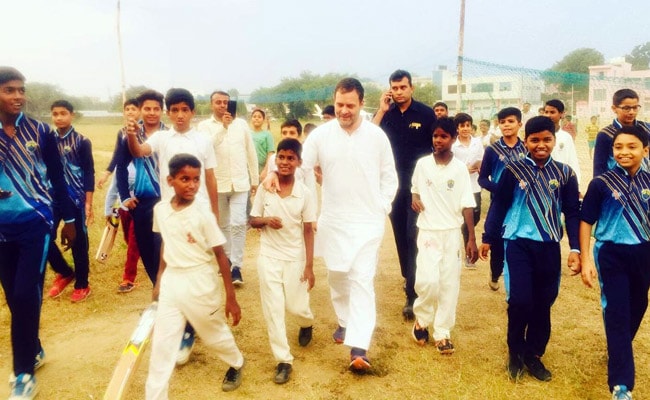 In a photograph, Rahul Gandhi is seen interacting with several smiling children

He was later seen interacting with several smiling children.

Rahul Gandhi, finally, made it back to Delhi by road as his helicopter's pilot declared the weather to be too adverse to resume the journey by air.

Earlier, Mr Gandhi at the poll rally in Mahendragarh had attacked Prime Minister Narendra Modi over the privatisation of state-run companies.

Taking a jibe at PM Modi and Finance Minister Nirmala Sitharaman, he said they should steal ideas from the Congress's manifesto to tackle the "mess".

"Rural India is in severe distress. The economy has sunk and the government is clueless about what to do. PM and FM should steal ideas from the Congress manifesto where we had anticipated and set down detailed plans to tackle the mess," he had earlier tweeted.

Mr Gandhi, who is currently campaigning for his party for the Maharashtra and Haryana assembly elections, has made economic slowdown his main issue to attack the government with. On Thursday, he alleged that PM Modi was involved in crony capitalism.

Rahul Gandhi was a last minute replacement by the Congress at the Mahendragarh rally on Friday. It was originally meant to be addressed by his mother and Congress chief Sonia Gandhi, but the party, without giving a reason, announced a change in plan earlier in the day.