Rahul Gandhi May Get His Debate on Communal Violence. Will He Speak? 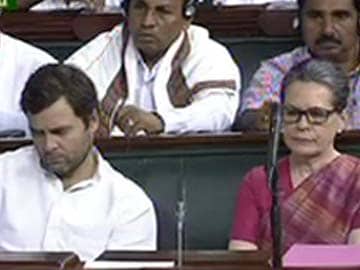 Mr Gandhi, a three-term MP who is ranked in the Congress second only to the party president and his mother Sonia Gandhi, is often criticised for not being visible or vocal enough in Parliament. (File photo)

New Delhi: This Friday, the ball could be in the court of Rahul Gandhi, who complained yesterday of not being allowed to speak in Parliament. The government, say sources, could agree to a discussion that day on recent incidents of communal violence. (Read: Rahul Gandhi Gets Second Row Seat In Lok Sabha)

It was the demand for an urgent discussion on this issue that saw an unusually aggressive Rahul Gandhi descend into the well of the Lok Sabha on Wednesday morning along with his partymen. They were agitated that the Speaker Sumitra Mahajan had disallowed the discussion.

"We are not being allowed to speak in Parliament...there is a mood in Parliament that only one man's voice counts for anything in this country," said Mr Gandhi in a jibe at Prime Minster Narendra Modi, even as he accused the Speaker of bias. (Read: Just One Man's Voice Heard In Parliament, Says Rahul Gandhi)

"Those who don't speak in the House accuse us of not allowing them to speak," retorted Finance Minister Arun Jaitley, as leader after indignant BJP leader attacked Mr Gandhi. (Also read: After Rahul Gandhi's Jibe at Prime Minister, BJP Talks of 'Palace Coup')

Mr Gandhi, a three-term MP who is ranked in the Congress second only to the party president and his mother Sonia Gandhi, is often criticised for not being visible or vocal enough in Parliament.

Last month, he appeared to have fallen asleep in House during a debate on price rise.  His party defended him with a spokesperson saying, "Many MPs take catnaps."

Mr Gandhi however insisted, "I have raised my voice many times in Parliament."

The Congress' aggressive protest on Wednesday is being seen as an attempt to rally the Opposition behind it - it is counting on parties like the Samajwadi Party, BSP and Trinamool Congress backing it on the issue of communal violence. Media reports allege that there have been over 600 incidents of communal tension or violence between the end of May and July this year in Uttar Pradesh, where by-elections will be held in 12 assembly seats soon.

Promoted
Listen to the latest songs, only on JioSaavn.com
Sources said when the Congress raised the demand for the discussion at a meeting of parliament's business advisory committee that sets the day's agenda, the Speaker had assured it that the matter would be discussed this week. But the opposition party insisted it be taken up on Wednesday.