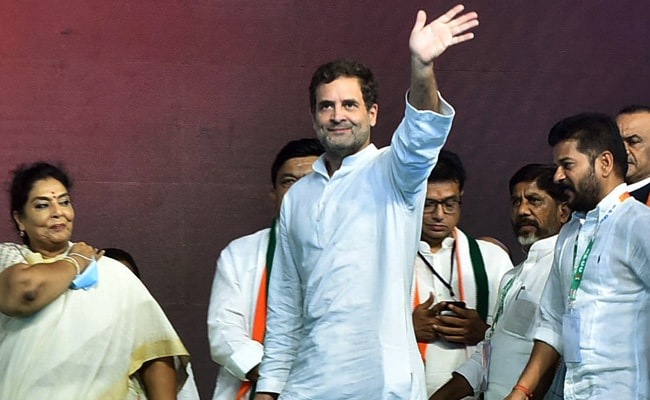 He targeted KCR saying just this one person has destroyed the "dream of Telangana".

Launching the poll battle for his party in Telangana, Congress leader Rahul Gandhi on Friday launched a blistering attack on the ruling Telangana Rashtra Samithi (TRS) and the BJP, accusing Chief Minister K Chandrashekar Rao, or KCR, of corruption and the BJP of being hand-in-glove with TRS to keep Congress away from power. The BJP is 'remote-controlling' the TRS and a vote for the TRS means a vote for the BJP, the Congress MP said.

The state is "not ruled by a Chief Minister but a raja (king)," he said adding that the assembly elections in the state next year will be a direct fight between Congress and the ruling TRS.

He targeted KCR saying just this one person has destroyed the "dream of Telangana" which the Congress imagined would be a 'model state' when it was formed. "We want to focus on education, health and employment," he said.

Mr Gandhi asserted that his party would never align with 'corrupt' TRS. "Telangana was not given to benefit just one family," he said and added that Congress can not compromise with a party that has 'betrayed' Telangana.

The former Congress chief is back from his much-discussed personal trip to Nepal and has jumped straight into launching the poll battle in the state. This is his first public appearance since he went abroad in early April in the middle of Congress negotiations with political strategist Prashant Kishor.

The Telangana Congress is hoping Rahul Gandhi's visit will give the party much needed momentum ahead of the assembly elections one and a half years away. Telangana is relatively a low-hanging fruit with TRS fighting two terms of anti-incumbency and the BJP at a distant third as of now in the race.

However, his visit to the state after three years comes a day after BJP president JP Nadda addressed a huge public meeting in Mahbubnagar saying that Telangana was ready for a change and would choose the double engine government of the BJP.

In the last assembly polls, the BJP won a single assembly, the TRS won 88 and the Congress 19. However, the BJP has won two recent polls in the state.

"Widows of farmers in the state are crying, there are thousands of them whose husbands committed suicide, whose responsibility is it? We will topple TRS in elections and it will be a direct battle between Congress and TRS...The person who has ruined the dream of Telangana, and stolen lakhs and crores from the youth, poor, we will not forgive them," he said.

The Congress leader promised loan waivers to farmers and said they will get fair and accurate Minimum Support Prices. He promised Rs 15,000 per acre direct transfer and a plan to replace the present Rythu Bandhu scheme. Named the Warangal declaration, the party announced a series of pro-farmer initiatives.

"Telangana's farmers need not be scared. As soon as Congress forms government, Rs 2 lakh (farm) loans will be waived off and you (farmers) will get the right MSP. This will be done in a few months' time (of Congress forming government)," he said.

Mr Gandhi made several other promises to farmers if his party wins - Rs 15,000 per acre per annum input subsidy as Indiramma Rythu bharosa scheme, Rs 12,000 per annum assistance to landless labourers registered with MGNREGA, Rythu Commission, better and remunerative prices such as Rs 2,500 per quintal for paddy, Rs 15,000 for chillies, and Rs 12,000 for turmeric.

Rahul Gandhi also met with families of farmers who died by suicide and promised to stop farmer suicides if Congress came to power.