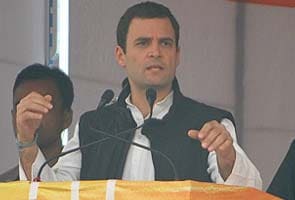 New Delhi: Rahul Gandhi and the BJP sparred today with the Congress general secretary reminding the latter that while in opposition, the Congress had supported the ruling NDA on the Kargil issue but with the roles reversed, it was not reciprocating on national issues.

The BJP hit back by saying the Congress had not done any obligation to it, saying it was the duty of every patriotic Indian to support the armed forces at that crucial juncture.

Mr Gandhi raked up the Kargil issue in his speech at the Congress rally at Ramlila Ground in New Delhi.

"We were also in the Opposition. Then the Kargil war happened. We were all together. Congress stands together in the interest of the country whether we are in government or not. They (BJP) oppose without any thought. They are engaged only in opposing without giving a thought to anything," Mr Gandhi said.

This did not go down well with the BJP which retorted by saying it is the duty of all Indians to support the country at such a crucial juncture.

"Did they (Congress) oblige the NDA by supporting us in Kargil war. That is the duty of every patriotic citizen to support the country's armed forces and the government at the time of a war," BJP leader Murli Manohar Joshi told reporters when asked about Gandhi's comments.

He added that there is nothing special about Congress having supported the Kargil war.

The Shiv Sena also slammed Mr Gandhi for his comments. "If Rahul does not understand the difference between Kargil and FDI in retail, he has no right to be in politics," Shiv Sena spokesman Sanjay Raut said. "Rahul is not only bachcha (novice) in politics but also kachcha (immature)," he added.

Promoted
Listen to the latest songs, only on JioSaavn.com
"Kargil was a war inflicted on the country by Pakistan. It was the duty of all to sink political differences and be united against enemy aggression. Congress did not do a favour by supporting the then government. Had Congress been in power during that time the NDA would have also supported the government," Mr Raut said.

The Kargil conflict took place in 1999 when Pakistani forces entered Indian territory and occupied posts in Kargil area of Kashmir but had to retreat in the face of a crushing defeat by Indian forces.