Raghuram Rajan said the three biggest problems for the Indian economy today are the agrarian distress, the ailing power sector and the crisis in the banking system.

Former Reserve Bank of India Governor Raghuram Rajan spoke to NDTV's Prannoy Roy on a range of challenges in front of the Indian economy today. Dr Rajan said the three biggest problems for the Indian economy today are the agrarian distress, the ailing power sector and the crisis in the banking system. The 55-year-old economist, who was the first RBI governor to not seek a second term in nearly two decades after his tenure ended in 2016, said government interference in institutions could affect both global and domestic investment. Mr Rajan's comments come amid a row between the central bank and the government over its autonomy.

Here are the highlights of the interview with Raghuram Rajan:

Dec 16, 2018 21:55 (IST)
"Lack of jobs is a very serious issue. This reflects the problems that even at 7 per cent growth, it is not producing the jobs 25 million people applying for 90,000 railway jobs - that seems to me a reflection of the fact that we have a real job problem," Raghuram Rajan says.
Agrarian distress too is a huge problem, Raghuram Rajan says. "This, power and banks are the main problems," Dr Rajan says.
"We need to see agriculture as a growth engine," he says.
'Lack of women participation in economy is very worrisome. We're not creating opportunities for women," he adds.
Dec 16, 2018 21:53 (IST)
On demonetisation, Raghuram Rajan says, "Net impression is that it had a significant effect on our growth. The world was growing faster but we slowed down. There was a twin blow with the GST."
"GST was a good in the long run, but had teething problems... I was asked About demonetisation, I said it was a bad idea," he adds.
Dec 16, 2018 21:50 (IST)
"Not just foreign but even for domestic investors there has to be confidence there has to be a sense that the rule of law is upheld and to extent  India is very well positioned for growth so we should be protecting institutions because we will need them," Raghuram Rajan says.
"We can have faith in the institutions because they are protected by our democracy. If the governments lean too much on an institution, we have faith that the well-thinking people will come to the aid of those institutions," he adds.
Dec 16, 2018 21:48 (IST)
On the RBI vs government controversy, Raghuram Rajan says there is always a pressure on the central bank to pay the government more. "When I was governor, we paid the highest dividend to the government. But that isn't the issue any more. The government's doesn't just want the profit, it wants the excess." Dr Rajan says.
Dec 16, 2018 21:41 (IST)
"Given the controversies, it makes sense to have an external board to look at what's been done.
I'm not a GDP expert but my sense is that we've gone backwards and forwards. Ultimately we have to have confidence. For the outside investor. And for policy decision," Raghuram Rajan says.

"We need to have confidence on integrity of the data. The political controversies - nobody outside knows what's happening. But there's a tendency to believe the west. Need to build credibility for our statistics. There's enough controversy to have somebody independent to look at it," he adds.
"We need an independent body of experts, Indian and international, to examine the methodology as it is important to maintain the credibility of our statistics," he says.
Dec 16, 2018 21:39 (IST)
On GDP revision, Raghuram Rajan says revisions take place all the time, no problem as such.
But it needs to be explained what exactly you did and put out all the numbers.

"Reality is GDP is a sausage put together with assumptions, extrapolations, it's complicated," he says.

Dec 16, 2018 21:37 (IST)
"A defaulter is different from fraud. That (default) may be bad luck. If you start putting defaulters in jail then nobody will take any risk," Raghuram Rajan says.

Dec 16, 2018 21:37 (IST)
My worry is more that we can't bring fraudsters back to face justice in India, Raghuram Rajan says.
Dec 16, 2018 21:33 (IST)
"I'm unaware of where those cases stand. It had a list of the largest frauds. The reason I'm worried is if one gets away with immunity then others may follow," Raghuram Rajan says on the list of fraud cases he flagged to the Prime Minister's office.

Dec 16, 2018 21:32 (IST)
On India's bad debt crisis, Raghuram Rajan says
- We need to keep cleaning up the bad loans
- We need to have out of court settlements
- Bankers should be ready to make concessions
- Out of court in the shadow of bankruptcy should happen
- The National Company Law Tribunal should focus on the big cases
Dec 16, 2018 21:30 (IST)
On the IL&FS crisis, Raghuram Rajan says, "There were early warning signs of the financial crisis in IL&FS which should have been heeded."
"We've now discovered the extent of the problem largely... My sense was that we are now where we thought they might be... The reality is if you don't recognise it you're not forced to act," Dr Rajan says.
However, he adds, "I dont think IL&FS is India's Lehman moment."
"We need to take a close look at regulatory and supervisory structure. Regulators can't stop you from giving bad loans, they aren't bankers. But they can point out one," he says.
Dec 16, 2018 21:28 (IST)
Speaking on the cow economy and moves which make it difficult for the rural population to sell cattle after they have lived their age, Raghuram Rajan says its "reflective of how we take actions without taking into account wider impact."
"To do something about a cow you need to take care of old cows, their health. This makes the cow less of an asset to the farmer," he says.
"Any action has a reaction, general equilibrium... Ban on cow slaughter should be balanced by more gau shalas... And who pays for it?" he says.
.
"The cost falls on the person you didn't intend," he says.
Dec 16, 2018 21:23 (IST)
Raghuram Rajan says there's a lot to be concerned about protectionism. The worry with America-first or China-first, is that it sets up confrontation, Dr Rajan says.
Dec 16, 2018 21:22 (IST)
(Hatred is) spread very quickly on social media, Raghuram Rajan says.
Dec 16, 2018 21:21 (IST)
"Exclusion is never enough, it's never a benign outsider," says Raghuram Rajan.
Dec 16, 2018 21:21 (IST)
Could the extreme polarisation spark a civil war? "We've seen the example of Yugoslavia," says Dr Rajan, ominously.
But as a polyglot country, India can be vibrant by adopting that framework, he says. India's constitution allows for a constitutional nationalism, he says.
Dec 16, 2018 21:16 (IST)
"We're having this debate in India... The natural category is Hindu majoritarianism and then there [are those] excluded from the Hindu majoritarianism, which are the minorities - Christians and Muslims. The danger in this kind of majoritarianism is that rather than uniting one set, it essentially divides the country into big warring pieces," Raghuram Rajan says on divisive majoritarianism.
Dec 16, 2018 21:13 (IST)
The growing inequality worsened by distrust of the elite after the 2008 crash, Raghuram Rajan says. People did not see the fat cats go to jail after the 2008 crisis, instead there was widespread unemployment and poverty after the meltdown, he says.
Dec 16, 2018 21:11 (IST)
"There is a fear of the future. They've lost their unionised jobs. There is a fear for their kids, no quality education. They see lack of mobility," says Raghuram Rajan on the distrust for globalisation and liberalisation.

Dec 16, 2018 21:10 (IST)
"These are people who's jobs are being threatened, they don't see that goods are cheaper," Dr Rajan says on why globalisation is unpopular. "Trade is responsible for local job losses. But broadly its technology which is responsible. Thanks to online shopping and such," he says.

Dec 16, 2018 21:09 (IST)
Majoritarianism can be explained by the fact that today globalisation is seen as an elite project, Raghuram Rajan says. "Its seen that guys who go to Davis have benefitted. And not the yellow jackets in Paris," he says.
Dec 16, 2018 21:07 (IST)
There are several points of concern in front of the economy today. Here are some points we talk about in the interview 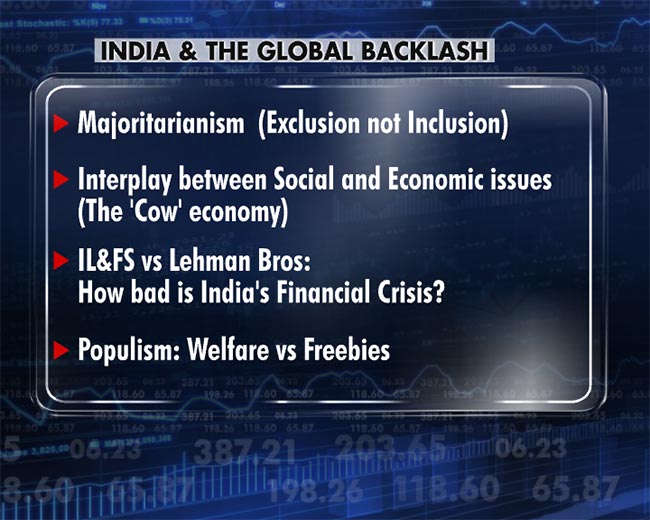 Growth is slowing this year globally and will probably slow next year, he says.