Videos have been shared on social media that capture the aircraft landing rehearsals on the expressway. 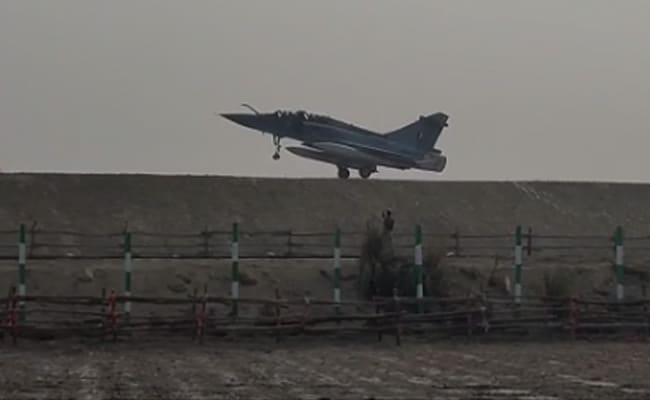 Prime Minister Narendra Modi will ride an Air Force C-130J Super Hercules today for the big launch of the 340-km long Purvanchal Expressway in Uttar Pradesh. Trial runs of the landing and an air show were in full swing while former Chief Minister Akhilesh Yadav accused the ruling BJP of taking credit for his work.

Videos on social media showed aircraft landing rehearsals on the expressway. A clip of a dry-run on Sunday showed a Mirage 2000, an AN-32 turboprop and a Sukhoi-30 landing on the highway about 100 km from state capital Lucknow. The C-130J Super Hercules that will take the Prime Minister to the spot was also seen in videos landing on a cemented airstrip in the Sultanpur district, which is meant to facilitate landings and take-offs of Air Force jets during emergencies.

PM Modi is expected to land at 1.30 pm and go for a public rally. Around an hour later, he will witness a Mirage 2000 landing on the 3.2 km airstrip and a servicing demo. An AN-32 transport aircraft will land troops on the airstrip. This will be followed by a flypast by three Kiran Mk2s, flanked by 2 Sukhoi 30 jets.

Prime Minister Narendra Modi will inaugurate the expressway on November 16.

Some sections of expressways in the country are marked for emergency landings for the Air Force, and reports say that concept originated during World War II in Germany.

PM Modi tweeted, "Tomorrow is a special day for Uttar Pradesh's growth trajectory. At 1:30 PM, the Purvanchal Expressway will be inaugurated. This project brings with it multiple benefits for UP's economic and social progress."

Tomorrow is a special day for Uttar Pradesh's growth trajectory. At 1:30 PM, the Purvanchal Expressway will be inaugurated. This project brings with it multiple benefits for UP's economic and social progress. https://t.co/7Vkh5P7hDepic.twitter.com/W2nw38S9PQ

"The (Purvanchal) expressway is 6-lane wide which can be expanded to 8-lane in future. Constructed at an estimated cost of about Rs 22,500 crore, the Purvanchal Expressway is going to give a boost to the economic development of the eastern part of Uttar Pradesh especially the districts of Lucknow, Barabanki, Amethi, Ayodhya, Sultanpur, Ambedkar Nagar, Azamgarh, Mau, and Ghazipur," reads the statement from the Prime Minister's office.

Today, Samajwadi Party's Akhilesh Yadav hit out at the BJP government, claiming that the project's foundation stone was laid in December 2016 when he was the Chief Minister.

"Those who have traveled on the Agra-Lucknow expressway know that your tea will not spill at (the speed of) 100 km per hour. But those who have taken a ride on the Purvanchal expressway will know that it will give you stomach cramps. The BJP's motto is - 'Ram Ram Japna'. To date, all projects being inaugurated are those that were constructed by the SP government," he added.

Sources in the UP government rubbished the claims, saying the foundation stone for the project was laid in July 2018 by Prime Minister Modi in eastern UP's Azamgarh and that construction work has taken place during Yogi Adityanath's tenure as the Chief Minister and in good time despite the roadblocks because of the pandemic.

"The Prime Minister had laid the foundation stone for this expressway in July 2018 and we are in a position today that the PM will inaugurate it. This is a prime example of how a 'double engine' government functions," Yogi Adityanath said, taking a jibe at rivals' "double engine government" dig used in the past.