The Congress' Punjab handle responded to Sunil Jakhar's tweet and said: "We pay tribute to the Iron Lady of India and former Prime Minister Indira Gandhi ji on her death anniversary. 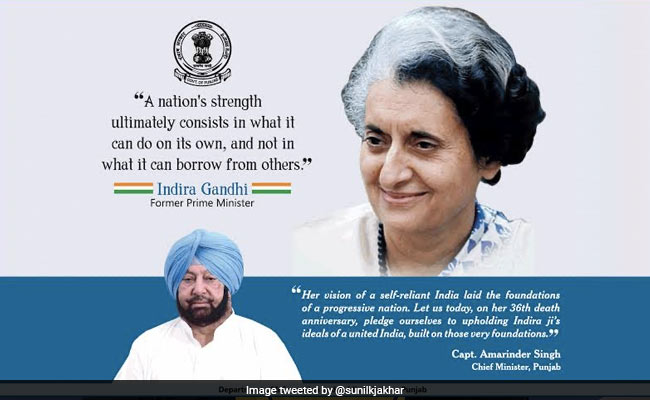 The ad tweeted by Sunil Jakhar, who was Punjab Congress chief before Navjot Sidhu

The senior leader declared he was 'borrowing' the ad as "none appeared today".

"I can understand BJP trying to erase the 'Iron Lady of India' from history, but don't we still have a Congress government in Punjab. PS: I know Captain saab won't mind my using this Punjab government's ad from last year, as none appeared today," he said.

I can understand BJP trying to erase 'Iron Lady of India' from history but don't we still have a Congress Government in Punjab.

The Congress' Punjab handle responded an hour later with a photo and the caption: "We pay tribute to the Iron Lady of India and former Prime Minister Indira Gandhi ji on her death anniversary."

We pay tribute to the Iron Lady of India and former Prime Minister Indira Gandhi Ji on her death anniversary. pic.twitter.com/tSFiG8wimH

The party's central handle has been posting tributes to Mrs Gandhi since early this morning.

A lifelong dedication to serve & sacrifice for our nation is in our DNA.#IndiasIndirapic.twitter.com/XPYd31HdWQ

"Must say, at least one of them has got his timing right," he said.

Continuing turmoil in Punjab turmoil comes at an inopportune time for the Congress, which is scrambling to keep its shape and prep for a re-election campaign for next year's polls.

The Amarinder Singh-Navjot Sidhu feud exploded in September and led to Mr Singh resigning (he claimed "humiliation"), a sulking Mr Sidhu made Punjab Congress chief (he wanted Mr Singh's job) and Charanjit Channi made the state's first Dalit Sikh leader (with one eye on the poll math).

Mr Jakhar had hit out at Harish Rawat (the former Uttarakhand Chief Minister was then the party's state-in-charge) over his support of Mr Sidhu, declaring it "undermined" Mr Channi's authority.

Mr Sidhu's subsequent and dramatic 'resignation' as Punjab Congress chief - upset that he was not consulted by the Chief Minister over some appointments - made matters worse, with Mr Jakhar slamming the former cricketer for his actions. "It's just not cricket... " he tweeted.

Since then, the party has also had to face the prospect of losing votes to Amarinder Singh, who remains a hugely influential figure and has announced his intention to start his own outfit and hold seat-sharing talks with the BJP and breakaway Akali Dal factions.

Yesterday Mr Singh (via his media advisor Raveen Thukral) rubbished rumours of backchannel talks with the Congress; he said "the time for rapprochement is over" and that he "will not stay".