Punjab Cabinet Overhaul: The Chief Minister attended another round of meet with Rahul Gandhi, party insiders say, over a video conference last night to finalise the names.

The MLAs pointed out Gurjeet Singh - among the state's richest MLAs - had been dropped from former Chief Minister Amarinder Singh's cabinet in January 2018 over an "infamous" sand mining scandal involving him and his family, and which resulted in the state forfeiting Rs 25 crore.

The MLAs also said it was "amusing" that proposed cabinet names from Punjab's Doaba region were Jat Sikhs and OBC Sikhs, but the area itself had nearly 40 per cent Dalit population.

"Therefore, we all request you to immediately drop Rana Gurjeet Singh from the proposed cabinet expansion and instead include a clean Dalit face in view of the upcoming election," the MLAs wrote. 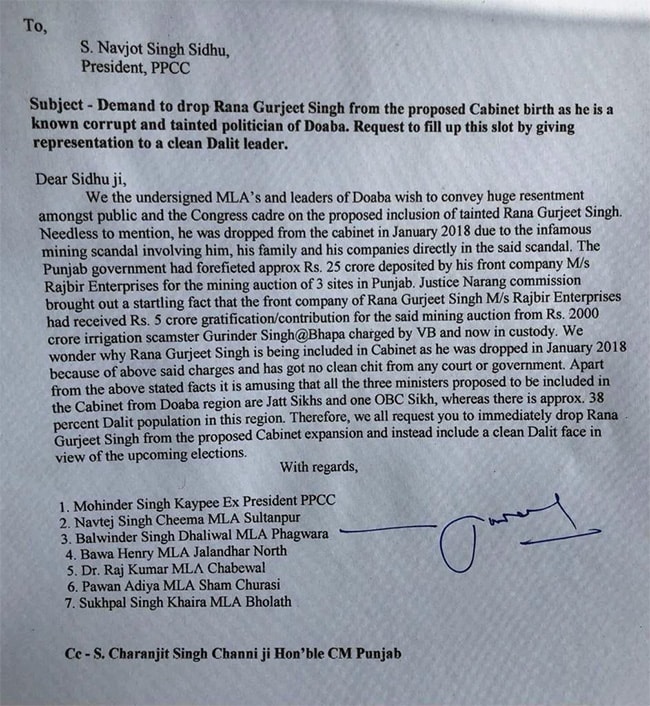 Dispute over Rana Singh's inclusion follows further last-minute deliberations within the ruling Congress, as the party looks to move on from the Amarinder Singh-era and focus on next year's election - one in which estimated 31 per cent Dalit votes in the state are expected to play a key role.

Questions over his proposed inclusion also come after opposition parties AAP and Akali Dal criticised the Congress over reports of the party retaining or including ministers with controversial tenures.

On Saturday, hours after Chief Minister Channi met Governor Banwarilal Purohit with a list of nominees for the cabinet, sources told NDTV last-minute talks had restarted within the Congress.

Mr Channi and party leader Rahul Gandhi had another meeting (this time via a video call), insiders said, to finalise the names ahead of this evening's oath-taking. The two have already met thrice in Delhi since Mr Channi took oath last week, becoming Punjab's first ever Chief Minister from the Dalit community.

Apart from Rana Gurjeet Singh that list reportedly had six names not in the cabinet at the time of Amarinder Singh's resignation, including Bharat Bhuhan Ashu.

Sources Saturday said the cabinet would see seven new faces, with five from Amarinder Singh's cabinet likely to be dropped. Some of his loyalists, though, are expected to be retained.

Amarinder Singh loyalists - including Brahm Mohindra, Vijendra Singla and Bharat Bhushan Ashu - are to be retained, sources had added.

Last week turmoil in Punjab - brewing for several months - peaked after a "humiliated" Amarinder Singh quit amid repeated and fierce clashes with his critic Navjot Sidhu.

After back-to-back meetings to iron out differences, Mr Channi was picked as his replacement and given two deputies - Sukhjinder Singh Randhawa and Om Prakash Soni.

All three - Mr Channi and his deputies - were chosen to boost the Congress' poll math.

"At 99 Crores. Go For It India": Minister On 100-Crore Vaccine Milestone