Rajni Bala (36) was shot dead by terrorists following which Kashmiri Pandits had threatened to undertake mass migration from the Valley if they were not relocated to safe places within the next 24 hours. 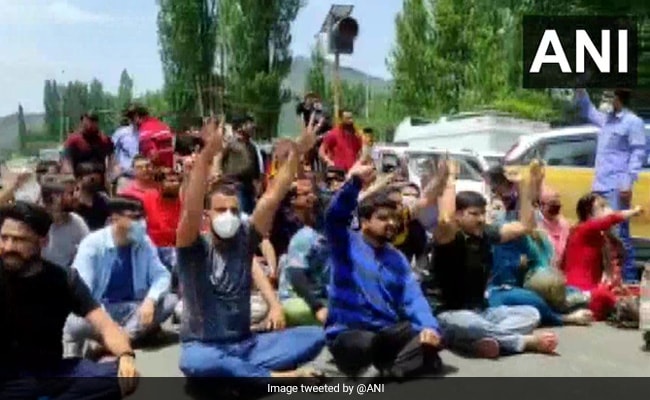 Protests against the killing of a Hindu school teacher in Kulgam continued in several parts of Jammu, Samba, and Kathua districts of Jammu and Kashmir for the second consecutive day on Wednesday.

Rajni Bala (36) was shot dead by terrorists following which Kashmiri Pandits, employed under the Prime Minister package, had threatened to undertake mass migration from the Valley if they were not relocated to safe places within the next 24 hours.

The protesters blocked the Jammu-Pathankot Highway in Samba on Wednesday and demanded the dismissal of officers responsible for failing to transfer Rajni Bala to a safe place that resulted in her killing.

Meanwhile, Samba, the district Rajni Bala belonged to, observed a complete shut down to protest against the killing.

Posted at a government school in Gopalpora, Rajni Bala was shot in the head by terrorists on Tuesday. She succumbed to injuries at a hospital, according to police. Calling the Valley's Hindu population a "soft target", Jammu and Kashmir BJP chief Ravinder Raina, who visited the bereaved family in Samba and faced protest, said there is an urgent need to formulate a security plan for the safety of the community as Pakistani terrorists were targeting them constantly.

Hundreds of protesters took out a rally toward the Jammu-Pathankot highway and raised anti-government and anti-Pakistan slogans. They staged a sit-in on the highway, blocking the traffic and demanded dismissal of officers, especially that of Kulgam's Chief Education Officer(CEO), for turning down repeated requests of the couple and delaying Rajni Bala's transfer to Kulgam for months.

The protestors also raised slogans against Lieutenant Governor Manoj Sinha over the failure on the security front to protect the Hindus serving in government offices in the Valley and burnt an effigy of the administration.

The administration led by Deputy commissioner Anuradha reached out to protesters to lift the blockade on the highway, but the agitated protesters continued their demonstration.

Shattered by the death of his wife by terrorists minutes after he dropped her at the school, Raj Kumar had on Tuesday blamed the administration for turning a "deaf ear" to their repeated requests to transfer her in view of the targeted killings of Hindus in the Union territory.

The couple was transferred on Monday, just a day before the attack. Tuesday was supposed to be Rajni Bala's last day at her old school.

Mr Kumar said Hindus are soft targets in Kashmir and the administration should relocate them in view of the fear psychosis triggered in the wake of the selective killings by terrorists.

Meanwhile, the protesters told Raina that their government led by Lieutenant Governor Manoj Sinha has failed to protect Hindus in Kashmir.

The protesters also tried to heckle him, but several BJP activists and cops intervened.

"Hindus are being killed in Muslim majority Kashmir under the BJP rule. Twenty-two Hindus, including Kashmiri Pandits, Dogra Hindus and outsiders, have been killed in the past and several injured by (bullet) shots," former Samba Member of the Legislative Assembly(MLA) Yashpal Kundal said.

Video: Bihar Thief Was Dangled From Train, Then Dragged Inside, Thrashed