As the Congress-led opposition protest was going on in front of a statue of Dr Bhim Rao Ambedkar, Prime Minister Modi was inside parliament describing the Constitution as a "holy book" 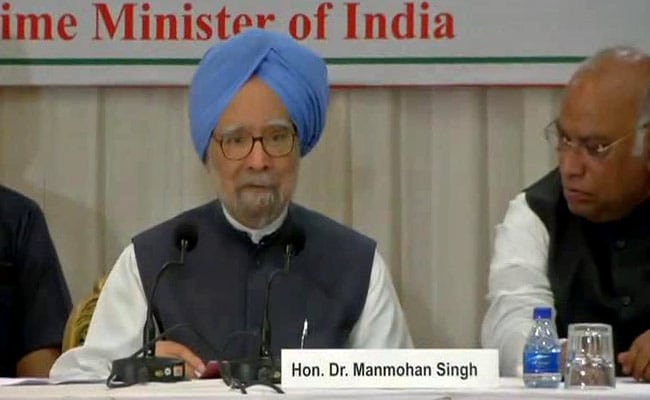 Shortly after Prime Minister Narendra Modi called the Constitution a "holy book" his predecessor, the Congress's Manmohan Singh, gently reminded him that "the proof of the pudding is in the eating". The former Prime Minister had assembled today, with Sonia Gandhi and a number of opposition leaders, including the Shiv Sena's Arvind Sawant, outside a statue of Dr Bhim Rao Ambedkar in parliament premises to protest the political situation in Maharashtra. At the protest Mrs Gandhi responded to the Prime Minister's Constitution Day speech inside parliament by reading out the Preamble to the document.

"I think the proof of the pudding is in the eating. The way the central government has behaved in Maharashtra, it is not certain that constitutional norms are safe in the hands of present establishment," Manmohan Singh said.

Congress leader Rahul Gandhi, who was also at the protest, had, on Monday, told parliament "there is no point in my asking the question (on Maharashtra) as democracy has been murdered".

Addressing parliamentarians in the Central Hall, Prime Minister Modi had said: "(I have) always considered our Constitution to be a holy book, a guiding light".

Chaos broke out in Maharashtra in the early hours of Saturday morning after the BJP's Devendra Fadnavis, backed by breakaway NCP leader Ajit Pawar, was sworn in as Chief Minister in a secretive ceremony.

A furious Congress-Shiv Sena-NCP front, which was inches away from staking claim to the government, approached the Supreme Court on Sunday. This morning the top court ruled in favour of the tripartite alliance and ordered a floor test to be held tomorrow evening.

Discussing the ruling, Mr Singh said that decision of the top court had to be respected. Earlier Sonia Gandhi welcomed the order and said: "We will win the floor test... wait and see what happens tomorrow".

Former Prime Minister Manmohan Singh, an economist by training, has periodically offered Prime Minister Modi advice on the state of the Indian economy. Last week he urged PM Modi to set aside his "deep-rooted suspicion of industrialists and entrepreneurs", which has halted economic development and ruptured India's social fabric.