It is a BJP leader - who also goes by the name Priyanka - whose face was morphed into that of goddess Durga, who slays Mahishasura (with Priyanka Gandhi Vadra's face). 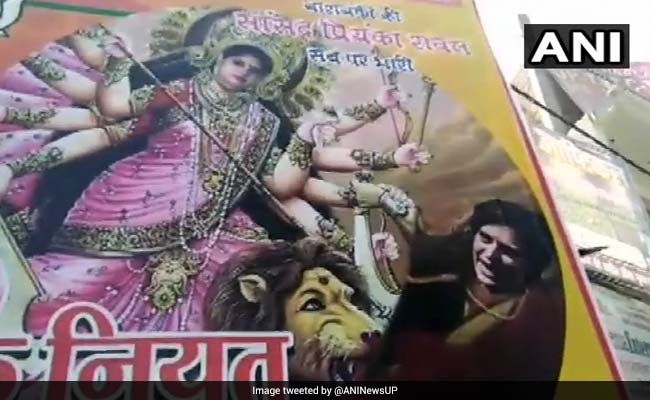 Priyanka Gandhi Vadra was portrayed as Mahishasura in a poster in Barabanki.

The poster game in Uttar Pradesh after Priyanka Gandhi Vadra's entry into politics two weeks ago went a notch higher today with the latest one depicting her as Mahishasura, the demon king who is killed by goddess Durga.

The posters were put up in the town of Barabanki in Uttar Pradesh. It is a BJP leader - who also goes by the name Priyanka - whose face was morphed into that of goddess Durga, who slays Mahishasura (with Priyanka Gandhi Vadra's face).

The BJP's Priyanka Rawat, who is portrayed as Durga, denied knowing anything about the posters."I have learnt of this only from you. I was unaware of this. I will see who has done it," Ms Rawat said.

The Congress in Uttar Pradesh's Gorakhpur put up posters of Priyanka Gandhi Vadra last week depicting her as a modern "Jhansi ki rani".

The district unit of the party demanded that she be fielded from Gorakhpur - Uttar Pradesh Chief Minister Yogi Adityanath's home turf - in the national elections. The poster had the slogan ''Gorakhpur ki yahi pukar, Priyanka Gandhi sansad is baar (This is the call of Gorakhopur, Priyanka Gandhi will be the parliamentarian this time)."

Priyanka Gandhi Vadra, 47, joined politics last month after years of speculation. She has been appointed as the Congress general secretary in-charge of eastern Uttar Pradesh. She will handle the party's campaign for the national election in the region which includes the constituencies of Prime Minister Narendra Modi and Yogi Adityanath.