No Space For "Badla": Priyanka Gandhi Vadra Hits Out At Yogi Adityanath

Addressing reporters in Delhi this evening, two days after she accused UP cops of manhandling her, Priyanka Gandhi Vadra dismissed concerns about her own safety

The Congress's Priyanka Gandhi Vadra hit out at Chief Minister Yogi Adityanath and the UP police force today, alleging the two were "complicit in wrongdoings" in the brutal crackdown against people protesting the citizenship law. She also accused the police of "working to ensure Yogi's badla", referring to a shocking statement by Chief Minister Yogi Adityanath, who said his government would take "revenge" on anti-CAA protestors. Ms Gandhi Vadra's comments come two days after she accused Lucknow cops of manhandling her - she said they "grabbed me by the neck" - while en route to visit a retired IPS officer arrested for opposing the Citizenship Act.

Addressing reporters in Delhi this evening, Ms Gandhi Vadra dismissed concerns about her own safety and said India was "no place for enmity, violence and revenge".

"My safety isn't a big issue... (it) doesn't deserve security. We are talking about safety of common man, safety of citizens. The cases we know of suggest more than 5,500 have been arrested. Many have been jailed in discreet manner... they are being thrashed. Police and administration are complicit in wrongdoing," Priyanka Gandhi Vadra said.

"Yogi-ji wears 'bhagwa' (saffron). It is not his...saffron belongs to this country's religious and spiritual tradition. It is a symbol of the Hindu religion. He should follow that religion. There is no place for enmity, revenge and violence in that religion," she added.

There have been massive protests, some of which turned violent, across Uttar Pradesh against the Citizenship Act, the first-ever law to make religion a criteria for citizenship. More than 20 people have died, many from bullet injuries. UP cops had initially denied they opened fire but, last week, Bijnor police told NDTV that one protestor in the town was killed in police firing.

"I went to Bijnor... two kids died there. One was a coffee vendor who was standing outside his house; he had told his father he'd go and buy milk. His father advised against it but he went ahead," she said, adding, "People say cops picked him up and, after 30 minutes, they got to know a boy's body had been found... he had been shot. Cops pressed FIR, threatened victim's family against seeking justice". 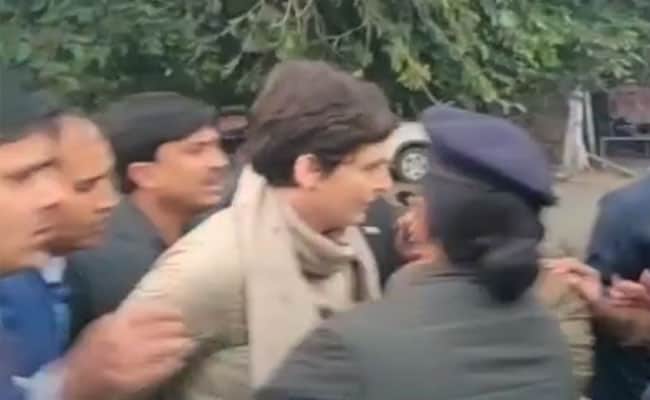 "The other (referring to 20-year-old Suleman who was an IAS aspirant and had nothing to do with the protests, according to his family) had gone to offer namaz," she continued.

The Bijnor police chief has claimed the killing of Suleman was in self-defence.

"An IPS officer, a follower of Ambedkar, was arrested from his house. His home reflects the kind of person he is... he had posted urging peaceful protests. His 75-year-old wife is ill," Priyanka Gandhi Vadra said, referring to the former IPS officer she was trying to visit when stopped by UP cops.

She also alleged the police was arresting people - more than 1,100 have been arrested from across the state, according to official data - who had nothing to do with agitations. 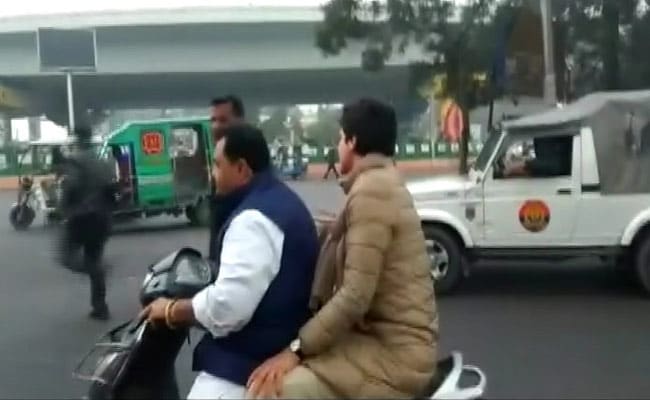 "Chief Minister is from a traditional Hindu family... Congress remarks on 'bhagwa' show they don't know what it is... it is no symbol of violence. They are worried about diminishing votes and are shielding those who damaged public property," he said.

The Congress has demanded a judicial inquiry into the "unlawful conduct" of UP police officers, whose actions, the party said, were not in keeping with a force duty-bound to protect the rights of citizens.

In a letter to UP Governor Anandiben Patel, the party made four requests, including asking the state Home Ministry to order immediate exercise of restraint to "ensure cessation of violent, unlawful and criminal acts by UP government and police".

"...the fundamental right to free expression as enshrined in the Constitution (must) be protected and upheld by law and state and ensured to the citizens of the state," the letter reads.

The Congress also asked for an impartial assessment of all cases - by an independent commission - filed against peaceful protesters and that bail be granted to wrongly charged protesters. The letter also asked for notices for confiscation of property in lieu of damage recovery and other similar punitive actions be suspended till due process can be established and appropriate inquiries by competent authorities is completed.

Earlier this week the UP government sent notices to protesters demanding they pay for damage to public property in last week's violence. Nearly 28 people were asked to pay Rs 14.86 lakh.

The government says the Citizenship (Amendment) Act seeks to give non-Muslim refugees from three Muslim-dominated neighbouring countries Indian citizenship if they fled to India because of religious persecution. Critics say it violates secular tenets of the Constitution and discriminates against Muslims.