Priyanka Chopra also plans to visit the Rohingya camps in Teknaf, Balukhalil and Jamtoli in Ukhia next.

Rohingya children are at the forefront of a humanitarian crisis, said actress Priyanka Chopra, after visiting the Rohingya camps in Cox's Bazar in Bangladesh on Monday.

In a moving post on Instagram, the 35-year-old UNICEF Goodwill Ambassador wrote, "This is an entire generation of children that have no future in sight. Through their smiles I could see the vacancy in their eyes."

"The world needs to care. We need to care. These kids are our future," she further wrote, asking for support.

The actress, who has been associated with children welfare causes for almost a decade, had visited Jordan last year, to meet the Syrian refugees.

Ms Chopra spent around an hour with the children at Shamlapur Rohingya camp under Baharchhara union in Teknaf and then visited a UNICEF-run clinic. 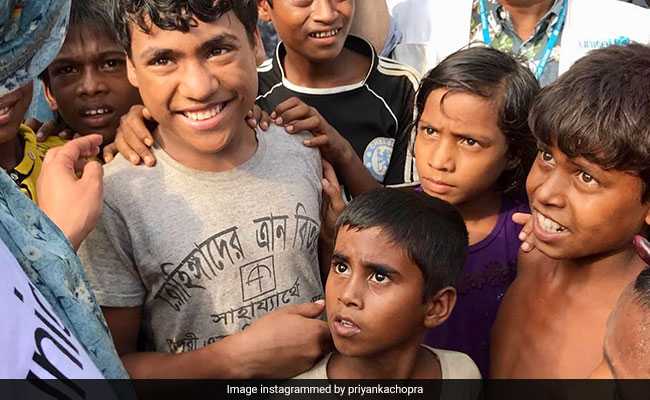 The Goodwill Ambassador asked children about their well-being, whether they were vaccinated, and if they were willing to return to Myanmar.

Around 60 per cent of the people in these camps are children who are vulnerable and living in over-crowded camps. They don't even know if they are going to get their next meal, she wrote.

Promoted
Listen to the latest songs, only on JioSaavn.com
The houses that they have built so far, could be destroyed when the monsoon season looms taking away the sense of safety in them, she added.

Ms Chopra also plans to visit the Rohingya camps in Teknaf, Balukhalil and Jamtoli in Ukhia.
She is scheduled to visit the Kutupalong camp on May 23 and is expected to return to Dhaka the next day.

Review Of Covaxin Shot Underway, May Get Recommendation In 24 Hours: WHO Official