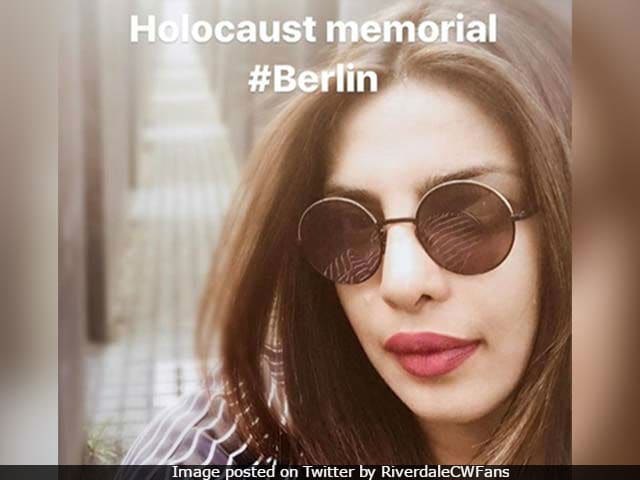 Priyanka Chopra at the Holocaust Memorial in Berlin (Courtesy: RiverdaleCWFans)

New Delhi: Actress Priyanka Chopra offended two separate sets of folks with two separate sets of social media posts while in Berlin, where she was promoting her Hollywood debut Baywatch. One - the easily shocked were outraged that she wore a short dress to meet Prime Minister Narendra Modi, who was serendipitously in Berlin on the same day. Two - she posted selfies with brother Siddharth from the Holocaust Memorial. Priyanka Chopra was unfairly trolled for the first - for the second, she really ought to have known better and appears to have removed the posts. Twitter, however, isn't so easily pacified and an absolute flood of tweets are criticising the 34-year-old star for her perceived insensitivity.

While the knee-baring Zimmerman dress could be considered inappropriate only by the ultra-conservative, the Holocaust Memorial selfies were indeed bad form. Tourists taking pictures - and Priyanka isn't alone, there are campaigns against those who do - at a site that reminds us of the 6 million Jews put to death under Hitler's regime is seen as being tone deaf in the extreme.

Twitter has given Priyanka Chopra a stern lesson in appropriate and respectful behaviour:

Priyanka Chopra took selfies at the Holocaust memorial.. is this a another attention seeking stunt ??? Shouldn't have done that ..

Taking selfies at the Holocaust Memorial sounds like EXACTLY something @priyankachopra would do tbh.

Why is it okay for @priyankachopra to take selfies at the #Berlin#holocaust#memorial? She isn't striking yoga poses & all that but really?

These are the pictures that Priyanka Chopra posted, preserved for ever more on social media.

Is it respectable for @priyankachopra to be taking selfies at the #Holocaust Memorial? pic.twitter.com/BKPpJOAsE7

Promoted
Listen to the latest songs, only on JioSaavn.com
This isn't the first time Priyanka Chopra, a rising international star, has been accused of insensitivity. Last year, she posed for the cover of Conde Nast Traveller's India edition in a t-shirt that had the words 'refugee,' 'immigrant' and 'outsider' struck out in favour of 'traveler' - a deafening clamour pointed out to Priyanka, who later apologised, that being a refugee was not a choice and that her t-shirt was a distasteful display of privilege.

The message behind our 6th anniversary issue cover.
https://t.co/seAZzX1BPb#PCinCNT#WhyWeTravelpic.twitter.com/73rdX2af9Q

Priyanka Chopra is now in London, on Baywatch duty with her cast mates Dwayne Johnson, Zach Efron, Alexandra Daddario and others. She stars in the film as the villain, a drug dealer named Victoria Leeds. Baywatch releases in India tomorrow.