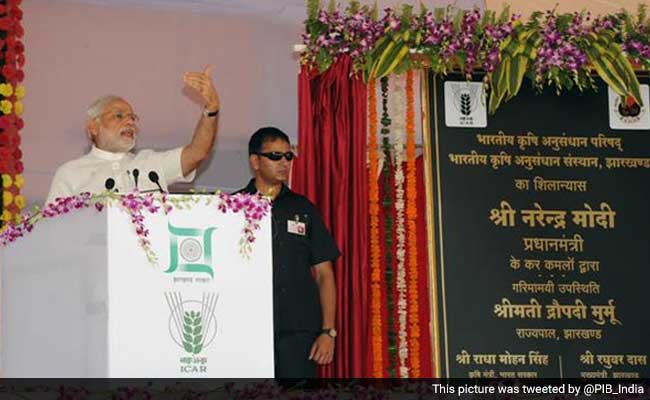 He said Indian farmers are still lagging behind in terms of availability of good quality seeds, adequate water, power, availability of right price and market for their produce.

"Unless we prepare a balanced and a comprehensive integrated plan, we will not be able to change the lives of farmers," he said in Jharkhan's Hazaribagh while laying foundation stone of Indian Agricultural Research Institute.

Emphasising the need for use of scientific methods for farming to increase productivity, Modi said it was high time that the country goes for the second Green Revolution as the first such revolution took place long back.

He noted that the eastern part of India has the potential to bring about the second Green Revolution.

"It can take place in eastern UP, Bihar, West Bengal, Jharkhand, Assam, Odhisa," Mr Modi said. Pitching for 'per drop, more crop', Mr Modi stressed the need for research in the field of agriculture to determine the health of soil and its needs in terms of seeds, water quantity, amount of fertilization etc.

He said the government was taking steps to train youth in soil testing so that such labs could be set up on the pattern of pathological labs for humans. "This will also lead to job creation," he added.

Turning to pulses, he said India has to import these because of shortfall in production and noted that a special package has been given to farmers engaged in cultivation of pulses.

"The production of pulses in the country is very low and I urge farmers that if they have five acres of farming land, use four acres for other crops but cultivate pulses on at least one acre," Mr Modi said.

High production would help in reducing pulses import and availability of the commodity to poor people of the country, the Prime Minister said.

"Research is important in the agriculture sector. And this cannot happen only in one place... We have to see how can we make our agriculture more scientific and increase productivity and solutions are there for these issues," Mr Modi said.

He said the condition of the agriculture sector was not good in India as it was left on farmers' fate. So, while farmers world over have made progress, in India they are still lagging behind because of this attitude, the Prime Minister said.

"Unless we make a comprehensive integrated plan for all the things including fishery, dairy production, bee keeping and honey production, we would not be able to change the economic situation of villages and lives of farmers," he said, adding "That is why the central government is taking steps to make agriculture modern and scientific."

He said the "issue of concern" is how to increase the per hectare production. "It's not that we do not have solutions or we cannot have solutions. Through government policies, through training, resources should be provided and we can make agriculture modern and scientific".