Highlights: Budget Reflects Development For All, Says PM On Launch Of BJP’s Poll Campaign In Bengal 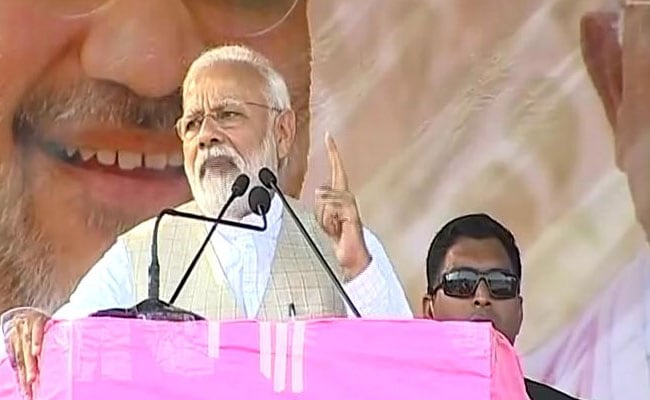 Prime Minister Narendra Modi addressed a rally in West Bengal's Durgapur ahead Lok Sabha election. He addressed two rallies in the state, first at Thakurnagar in North 24 Parganas, and the second at Durgapur.

PM Modi is expected to launch a nearly 300-km-long electrified section of the railways. He will also inaugurate a 20-km-long Hijli-Narayangarh line.

PM Modi will also launch the electrification of the 294-km-long Andal-Sainthia-Pakur-Malda and the Khana-Sainthia sections. This will ease the transportation of coal, stone chips and ballast to north and northeast India in a seamless manner, a statement said.

The venues of both the rallies have political significance. Thakurnagar, which is one of the venues, is the hub of the sizeable Matua community, who originally hail from erstwhile East Pakistan and began migrating to West Bengal in the beginning of the 1950s mostly due to religious persecution. The rally venue is near the house of Matua matriarch Binapani Debi.

The Durgapur rally of the PM Modi will be part of BJP's 'Ganatantra Bachao' (save democracry) programme in the state. The industrial hub of Durgapur is near the Asansol Lok Sabha constituency held by union minister Babul Supriyo.

Mamata Banerjee's Trinamool Congress (TMC) had on January 19 organised a mega opposition rally which was attended by leaders of 24 parties from across the country, including the Congress.

Here are the Highlights on PM Modi's visit to West Bengal:

Feb 02, 2019 15:20 (IST)
A heartless government that deprives the poor should not continue, said PM Modi.
Feb 02, 2019 15:15 (IST)
PM Modi said that the Central government is making efforts to develop infrastructure in the state and crores of rupees have been allocated for several railway projects in West Bengal. He further said that the TMC government isn't serious about the state's development.
Feb 02, 2019 15:11 (IST)
Congress is fooling people in the name of waivers, says PM Modi. TMC is not supporting the government at any level. Efforts are being made to develop communication infrastructure in Bengal. Budgetary allocation for Bengal has been increased but the TMC government is not serious.
Feb 02, 2019 15:01 (IST)
We have come out with a new, never-done-before scheme called the Pradhan Mantri Kisan Samman Nidhi. Something that is a permanent yojana to benefit farmers. It has never been done by any party in the history of India. The main part about this yojana is that it provides a token aid to farmers, not as a one-off, but an ongoing, continuous basis, for all time to come.
Feb 02, 2019 14:56 (IST)

PM Narendra Modi in Durgapur, West Bengal: What is 'Sabka Saath Sabka Vikaas' is evident in this( interim budget 2019), it has something for every section of society pic.twitter.com/LdryBR20IV

Feb 02, 2019 14:55 (IST)
Our government at the Centre always keeps you all in mind. In fact, just yesterday you would have noticed that the Budget presented in Parliament was made keeping you as the priority. Something that previous governments ignored. Be it taxes, or reaching out to farmers, the budget has something for everyone. It truly reflects our philosophy of 'Sabka Saath, Sabka Vikas', and like I said yesterday... This is just a trailer. This is just the interim budget. Wait till we bring out the regular budget, which will have much more to offer in terms of policies that benefit all... one that will help the country emerge as a 'New India'.
Feb 02, 2019 14:49 (IST)
Bengal has understood that the Trinamool Congress is only busy with the 'Syndicate'. Mamata Banerjee is not concerned about Bengal's development. In fact, TMC doesn't even look at projects, unless they don't see the gains they can get through the 'Syndicate'. But now I see that the people of Bengal are determined to uproot the Trinamool Congress from the state.
Feb 02, 2019 14:49 (IST)

PM Narendra Modi in Durgapur, West Bengal: I used to think that Didi who has herself suffered a lot during Left regime will not walk on the same path, but I was surprised that she adopted the same tactics. You can take this from me in writing 'Inka jaana tae hai' pic.twitter.com/CHZXQu7B6z

Lok Sabha Elections 2019: PM Modi Launches BJP's Poll Campaign In Bengal With 2 Rallies
From a packed ground in West Bengal's Thakurnagar, Prime Minister Narendra Modi today kick started his campaign in the state for the Lok Sabha elections, due by May. In a short address lasting only 14 minutes, he seemed to cut short his speech because of a stampede in the crowd, wrapping up after a brief mention of the Citizenship (Amendment) Bill and urging the Mamata Banerjee-led Trinamool Congress government to support it in Rajya Sabha.
Feb 02, 2019 14:30 (IST)
After independence and partition, many people stayed where they were. But after being tortured, they left and came back to India. They had to as hindus, sikhs, parsis and christians have nowhere else to go. And that is why we are bringing the citizenship law. It is a question of their rights. I urge the Trinamool Congress to support it in Parliament. My brothers and sisters here need it.
Feb 02, 2019 12:53 (IST)
I must let you all know that the BJP will never let you suffer. We know how you all are harassed by the 'Syndicate'. How a systematic extortion happens here in Bengal. All that will end now.  The Central government has started direct benefit transfers. You will no longer have to worry about the middlemen and 'Syndicates' troubling you and taking your money. You will receive it directly in your bank accounts. 100% of it.  I urge you all once again to remain where you are, and thank you all for showing so much love and support for us (BJP). I now understand why Mamata Banerjee is so scared to have us here. It is your love for us that scares her.
Feb 02, 2019 12:44 (IST)
I see a lot of you not being able to enter this massive rally ground which is packed to capacity. I urge you all to remain where you are. I thank you all for coming here in support. After seeing the sight here, I am confident that Bengal wants a change for progress, says PM Modi.
Feb 02, 2019 12:43 (IST)
I thank you all from the bottom of my heart for having come here in such large numbers to bless me and show your support for the BJP. Thakur Nagar has played a very important part in Bengal's social history. Thakur Nagar has contributed immensely... I feel proud to be here with you all. For many decades after independence, villages were ignored by successive governments. But no longer. No longer can a 'New India' function this way. In fact, India's progress will have to be villages-based.
Feb 02, 2019 12:39 (IST)
PM Narendra Modi began addressing a public meeting in Bengal's Thakurnagar.
Feb 02, 2019 12:16 (IST)
Prime Minister Narendra Modi's chopper arrives in Thakurnagar. PM will be addressing a public meeting shortly.

Rahul Sinha, BJP: Just 50-70 metres away from the meeting venue of PM Modi in Durgapur, WB CM Mamata Banerjee's posters are being put above PM's banners. This is proof there is no democracy in West Bengal. When one of our workers protested against such activities he was attacked. pic.twitter.com/d21M4o3o4a