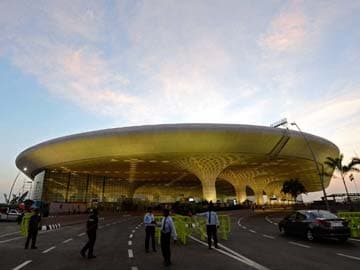 "This terminal is expected to establish new global benchmarks of functional efficiency and operational safety...  This terminal will fulfill the expectations we have from it and make us feel proud," Dr Singh said, dedicating the new terminal to the nation.

"We are working hard to make this airport a world-class facility. Our efforts have met with success. Ratings have improved considerably in recent years," the PM also said.

The actual operations at the terminal are likely to commence from February. Earlier, the operation was to start from this month itself. The spanking four-storey glass marvel, whose design has been inspired by a dancing peacock, has come up at a whopping investment of Rs. 9,800 crore as against initial projection of Rs. 7,452 crore. (10 things to know about the new terminal)

The terminal boasts of tens of thousands of artifacts and paintings, housing arguably one the largest collections in the world at an airport. (Watch)

The most attractive feature of the swanky terminal is the museum of artifacts. Stretching along a 3-km art wall, the museum houses over 7,000 artifacts collected from over 1,500 artists across the country.

Under the privatisation policy of the UPA-I government, the Delhi and Mumbai airports were given to private parties for modernisation in 2006.

While a GVK-led consortium bagged the contract for Mumbai airport, the Delhi airport went to a GMR-led entity. Even after privatisation, the state-run Airports Authority of India holds 26 per cent stake each in these two airports.

The state-of-the-art T2 will be larger than Singapore's Changi T3 (3.80 lakh sqm) and London's Heathrow T5 (3.53 lakh sqm). It will be able to accommodate 9,900 passengers during peak hours. It has a 7-lakh sq ft area of retail space, lounges and travel services.

The Rs. 12,500-crore modernisation and development work of the Mumbai airport actually began in 2008 and was scheduled to be completed in 2010.

Promoted
Listen to the latest songs, only on JioSaavn.com
As far as facilities are concerned, the terminal will have 188 check-in counters, 60 immigration sites for departing passengers and 76 immigration counters for incoming fliers.

Also, passengers will have access to 47 escalators and 73 elevators. The facilities also include 52 boarding gates, around 11,000 seats, 101 toilets, 44 travelators, 16 lounges, and 10 baggage carrousels, among others.