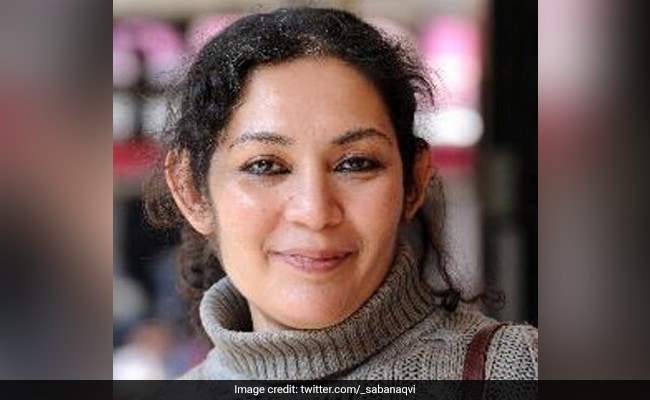 Two days after journalist Saba Naqvi was also named in police cases registered against former BJP representatives Nupur Sharma and Naveen Jindal for alleged hate speech, the Press Club of India (PCI) has condemned Delhi Police for including her in the FIR.

From its Twitter handle, the club said it "vehemently condemns the lopsided and highhanded manner of Delhi Police in lodging FIR against Saba Naqvi, senior journalist and columnist".

The FIRs were part of a chain of events set off by Nupur Sharma's utterances against Prophet Muhammad on TV and Naveen Jindal's tweets against the Prophet. While Nupur Sharma, who was the BJP's national spokesperson, has bene suspended from the party, Naveen Kumar Jindal has been expelled. He was the Delhi BJP media unit head.

The Press Club of India vehemently condemns the lopsided and highhanded manner of Delhi Police in lodging FIR against Saba Naqvi, senior journalist and columnist.
The whimsical way of Delhi Police in reaching out to her posts reflects Delhi Police's more-than-eagerness to make…

…her posts blasphemous thereby registering her as accused for a crime which she has not committed at all.
The Press Club demands immediate withdrawal of FIR against her and all on-going enquiries against her be stopped forthwith.

Several West Asian countries demanded a public apology from India. The government tried to defuse the row calling the comments "views of fringe elements". After the BJP acted against its two leaders, legal action came after two weeks of Ms Sharma's TV statements.

On Wednesday, Delhi Police filed a case against Ms Sharma, Mr Jindal, and also named Hyderabad-based politician Asaduddin Owaisi and journalist Saba Naqvi, among others, and others for "inciting people on divisive lines" and "inciting riots".

The Press Club has demanded immediate withdrawal of the FIR against her and all inquiries against her stopped.

On Thursday, Asaduddin Owaisi also condemned the police action and said inclusion of Muslim names is "to assuage BJP supporters".

Ms Naqvi has already expressed shock over the inclusion of her name and alleged that she has been "selectively targeted".

In a statement, she said: "I am a journalist and tasked with speaking truth to power. Social media and news sites suggest the FIR has been filed because of a WhatsApp forward that I shared only to delete it a few hours later. Many others also shared the same image yet I have been selectively targeted in the FIR."