The president highlighted the "special connection" Mahatma Gandhi had with Villeneuve as he visited the town in 1931 at the invitation of Noble laureate Romain Rolland. 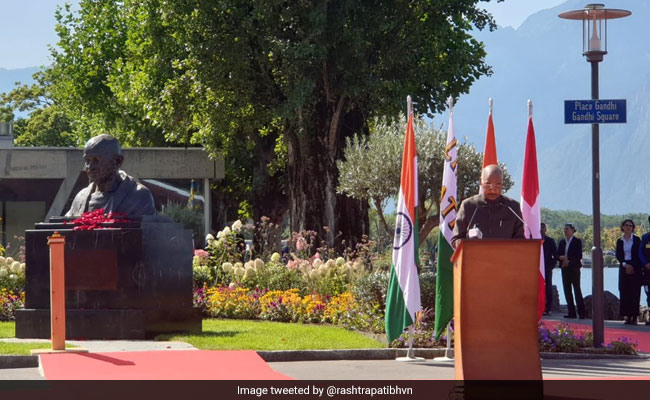 President Kovind said that Mahatma Gandhi believed in the oneness of humanity.

President Ram Nath Kovind today unveiled the bust of Mahatma Gandhi, marking the 150th anniversary of the Father of the Nation and hoped that his legacy will inspire the mankind to tackle climate change and conserve ecology.

President Kovind, in a special event organised in the city, thanked the commune of Villeneuve for celebrating Gandhi's legacy and naming a Square after him.

"He built his first hermitage in India on the banks of River Sabarmati. Today, we have brought him to the banks of Lake Geneva. You have given him a special place, close to nature and close to your hearts. It is a fitting tribute to a man who loved nature and cared so much for it," he said.

Noting that his teachings remain relevant even today, President Kovind said, "his legacy shall inspire us as we work together to tackle climate change and to conserve our ecology."

The president highlighted the "special connection" Mahatma Gandhi had with Villeneuve as he visited the town in 1931 at the invitation of Noble laureate Romain Rolland.

"In Villeneuve, Romain Rolland played Beethoven for him. They had long conversations on the Great War that had ravaged Europe and how peace could be secured for future generations," he said. 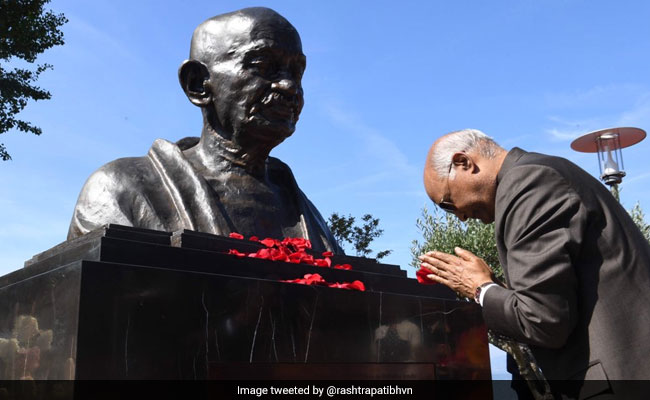 President Kovind said, " Mahatma Gandhi's legacy shall inspire us as we work together to tackle climate change and to conserve our ecology."

"As two democracies with deep respect for diversity, Mahatma Gandhi shall continue to guide us in our shared journey to bring peace and joy for one and all," he said.

Drawing a parallel between the commune system in Switzerland and the Indian village republics, President Kovind said, "Gandhian thought has yet another connection with you. The communes have a distinct social and political role in Swiss democratic polity. It is very much similar to the way Mahatma Gandhi laid down his concept of Gram Swaraj or Village Republics."

President Kovind said that Mahatma Gandhi believed in the oneness of humanity.

"He embraced all cultures and all peoples. He listened to Hindu religious songs and western classical music with equal ease and understanding," he said.

The president recalled that the two countries last year celebrated the 70th Anniversary of the India-Switzerland Treaty of Friendship signed in 1948.

"This was the first Treaty of Friendship that India signed as an independent nation. The seed of amity that we sowed then, has today grown into a luxuriant tree of mutual trust, cooperation and understanding," he said.

President Kovind, who reached Switzerland on Thursday, is on the second leg of his nine-day three-nation tour to Iceland, Switzerland and Slovenia.