In a rare occurrence, President Kovind awarded a Shaurya Chakra to 16-year-old Irfan Ramzan Sheikh who thwarted a militant attack on his home in 2017. 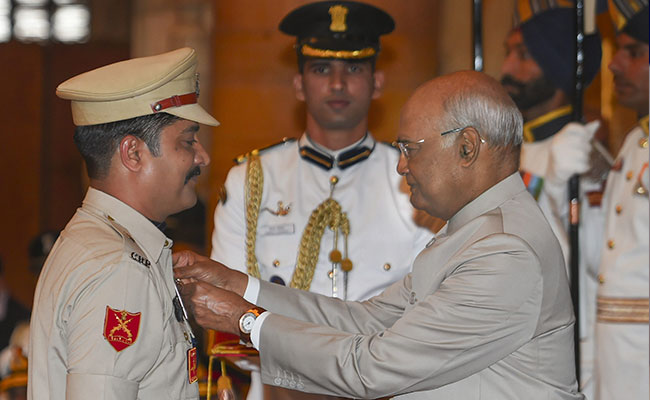 President Ram Nath Kovind on Tuesday awarded two Kirti Chakras and and an equal number of Shaurya Chakras posthumously to soldiers who laid down their lives in Army operations in Jammu and Kashmir and the Northeast.

In a rare occurrence, he also awarded a Shaurya Chakra to 16-year-old Irfan Ramzan Sheikh who thwarted a militant attack on his home in 2017.

The Kirti Chakras were awarded to Sowar Vijay Kumar of the Armoured Corps and Constable Pradip Kumar Panda of the Central Reserve Police Force (CRPF).

The two died in two separate operations in Jammu and Kashmir.

Rifleman Jaiprakash Oraon and Sepoy Ajay Kumar were awarded Shaurya Chakras for their role in counter terror operations in Manipur and Jammu and Kashmir respectively.

Anil Kumar Bhatt is also the general officer commanding (GoC) of Srinagar-based 15 corps, that takes care of anti-militancy operations in the Valley.

The PVSM is awarded to officers for "distinguished service of the most exceptional order".