Prepared to face consequences of sticking to principles: Nitish on split with BJP 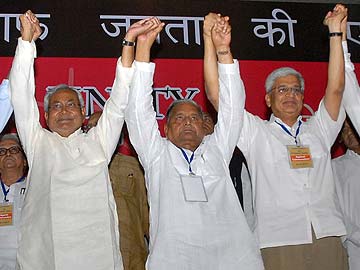 Nitish Kumar with Mulayam Singh Yadav during a meeting at Delhi's Talkatora stadium.

New Delhi: Nitish Kumar in Delhi for a convention organised by the Left, today said his party had taken a calculated political gamble to split from the BJP this year, to uphold its principles against divisive forces.

"We have stuck to our principles. This isn't a risk, it's a gamble. We will face the consequences," the Bihar Chief Minster said to much applause and added, "They say I am in the firing line...but we are like a rock. Any bullet will bounce off us."

Mr Kumar was among leaders of 14 parties that attended the convention against communalism, fueling speculation about a possible re-grouping of a non-Congress, non-BJP third front. The Janata Dal United leader admitted there was much curiosity about this, but would only say, "We are here to fight communalism. Democratic forces should unite as much as possible to defeat fascist forces."

Mr Kumar's JDU dumped the BJP, its political partner of 17 years, in June this year because it was set to name Narendra Modi its candidate for prime minister. Mr Kumar accuses Mr Modi of being a divisive leader.

He is sharing stage today with leaders of the Left and the Samajwadi Party, who too accuse the BJP of "communal politics." The Left says it has called the meeting in view of the UP riots last month. "These riot like situations may increase as elections near...we need to appeal for peace and calm," said Sitaram Yechury of the CPM.

Mulayam Singh Yadav of the Samajwadi Party, who supports the Congress at the Centre, has in the past hinted at the possibility of bringing together a third front as a political alternative for government formation at the Centre. But his party too denied that the convention was an early sign of an alliance being knit.

Promoted
Listen to the latest songs, only on JioSaavn.com
Also at today's meeting is one of the ruling Congress' closest ally, the Nationalist Congress Party. NCP leader Praful Patel said his party was merely attending the meeting against communalism with "like-minded" parties. "Too much should not be read into it," he added.

The absence of Chandrababu Naidu of the Telugu Desam Party, seen as close to the Left, is notable. Mr Naidu has recently been seen as getting closer to the BJP. He has emphasised that he sees his rival in Andhra Pradesh, the Congress, as the "bigger problem."