The RSS event in Nagpur has generated a lot of interest and controversy over the past few days, ever since Pranab Mukherjee agreed to address RSS trainees at the Sangh's headquarters in Nagpur. 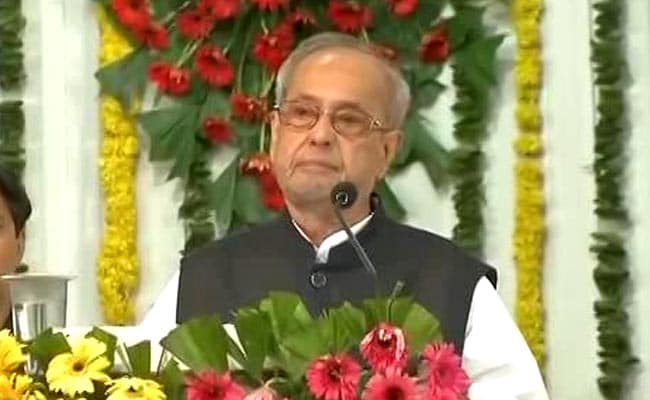 Pranab Mukherjee will address an RSS event in Nagpur on Thursday

Nagpur: Former President and Congress veteran Pranab Mukherjee today warned that any attempt to define India through "religion, dogma or intolerance" will only dilute the country's existence, as he attended an RSS event amid criticism by several of his party leaders including his own daughter. Mr Mukherjee said intolerance will only dilute India' national identity and Indian nationalism emanated from universalism, assimilation and co-existence. "In India, we derive our strength from tolerance, and respect our pluralism. We celebrate our diversity," he said. "I am here to share my understanding on nation, nationalism and patriotism about our country which is 'Bharat'," said Mr Mukherjee, who served as President of India between 2012 and 2017.

Here are the Live updates of Pranab Mukherjee's address at RSS event in Nagpur:

Jun 07, 2018 21:22 (IST)
"Pranab Mukherjee's visit to the RSS headquarters had led to a wide range of discussions and concerns. Today, Pranab Mukherjee has shown the mirror to RSS at their headquarters. He talked of plurality, tolerance and multiculturalism," says Congress leader Randeep Surjewala.
Jun 07, 2018 20:54 (IST)
"India's nationhood is not one language, one religion, one enemy. It is perennial universalism of 1.3 billion people who use more than 122 languages and 1,600 dialects, practice seven major religions and belong to three major ethnic groups, live under one system, one flag and one identity of being Bharatiya": Pranab Mukherjee at RSS event.
Jun 07, 2018 20:51 (IST) RSS is trying to bring everyone together in the country and not trying to establish itself as a Hindu outfit. No one is alien to us: Mohan Bhagwat 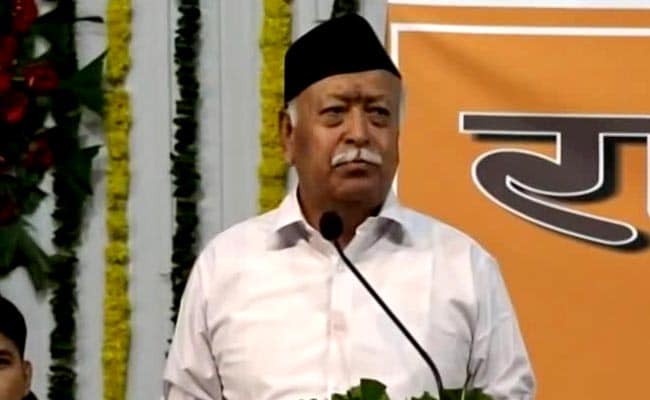 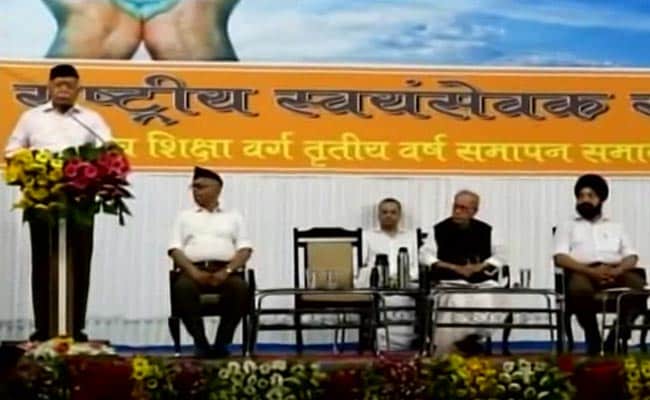 Jun 07, 2018 19:23 (IST)
Among those who tried to dissuade Mr Mukherjee from attending, were Congress leader Ramesh Chennithala, senior Congress leader Jairam Ramesh, former Union Minister CK Jaffer Sharief and the party's Bengal unit leader Adhir Choudhury.
Jun 07, 2018 19:21 (IST)
Pranab Mukherjee has been repeatedly asked to reconsider his decision by various leaders of the Congress, his party for five decades till he became the president in 2012. Many have expressed concern at the optics of the matter, pointing to what they call the divisive nature of the RSS, ideological mentor of the ruling BJP.
Jun 07, 2018 19:03 (IST)
Pranab Mukherjee and Mohan Bhagwat offers their homage at the statue of RSS founder K. B. Hedgewar. Read: Pranab Mukherjee At RSS Office, Calls Founder 'Great Son Of Mother India'
Former president Pranab Mukherjee received a warm welcome at the headquarters of the RSS this evening in Nagpur ahead of an event that he decided to attend despite fierce objections from the Congress, his party of over five decades.
Jun 07, 2018 18:41 (IST)
RSS cadres holds march past at the event in Nagpur 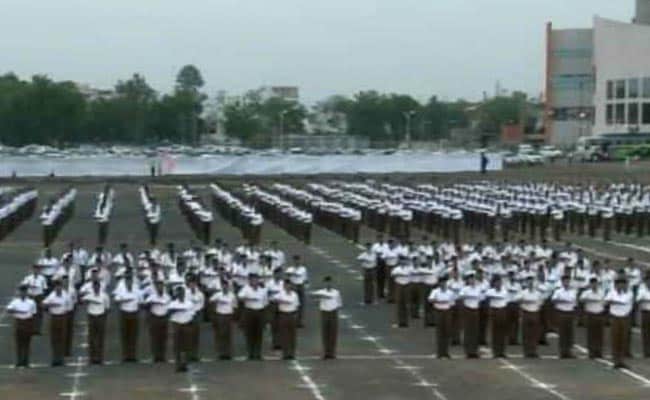 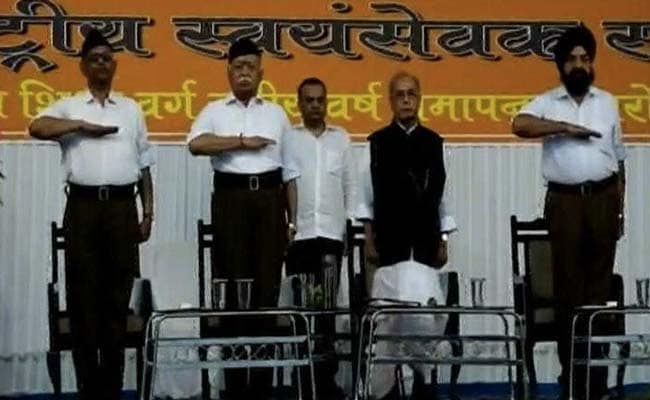 Today is a very fitting day to bring you all a primer on what the RSS really stands for. pic.twitter.com/m1oQ15nkDJ

Jun 07, 2018 17:42 (IST)
Former President Pranab Mukherjee called RSS founder KB Hedgewar "a great son of Mother India" in a written note in the visitor's book at his birthplace in Nagpur. 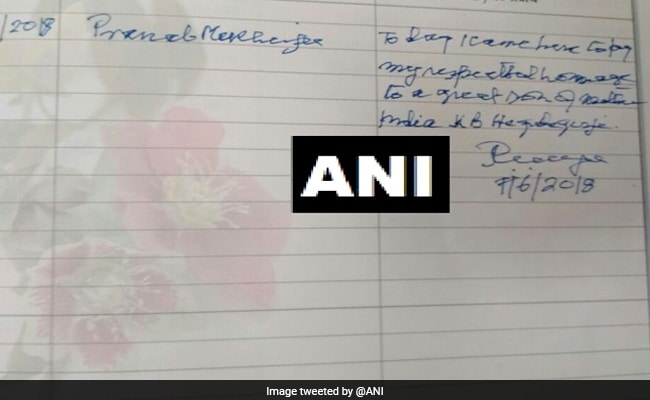 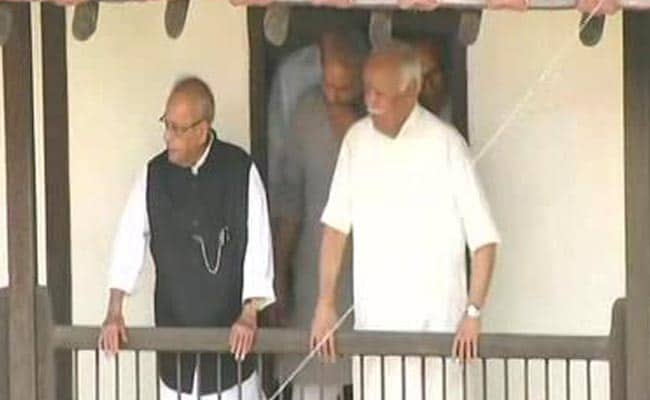 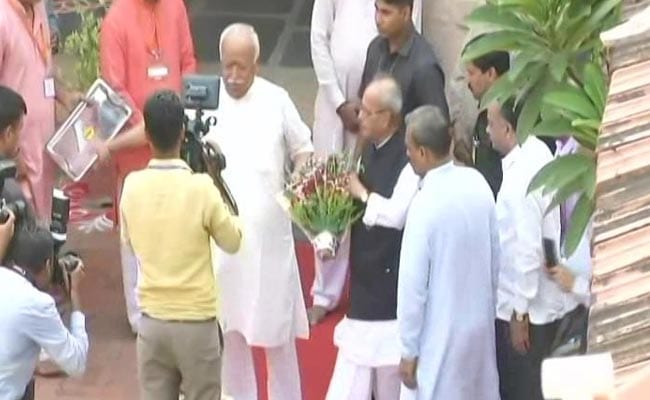