A newly constructed toll plaza on the four-lane highway at Sangam in south Kashmir's Anantnag district was recently made operational to collect toll tax from vehicles passing through it. 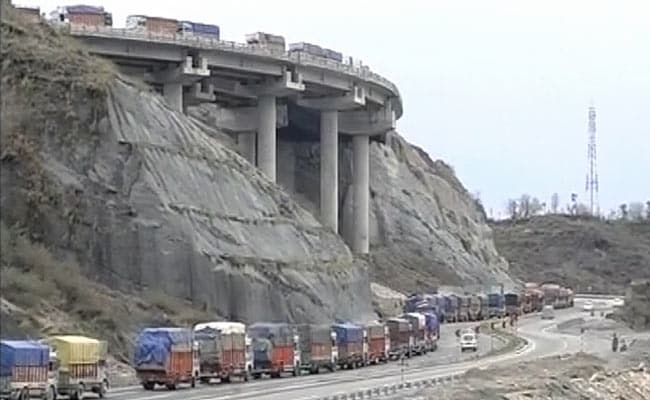 Political parties in Kashmir today demanded an immediate rollback of the toll tax being levied on vehicles on the Srinagar-Jammu National Highway, saying the move would put the people of the valley under duress.

A newly constructed toll plaza on the four-lane highway at Sangam in south Kashmir's Anantnag district was recently made operational to collect toll tax from vehicles passing through it.

In a statement, NC spokesperson Imran Dar urged the governor's administration to suspend the tax levied at the Charsoo toll plaza near Awantipora.

"The highway is still incomplete with some bridges still under construction. The economic activity in Kashmir has hit its lowest ebb in the last four years and the decision of levying an exorbitant toll tax will inadvertently put the people under duress," Mr Dar said.

Expressing dismay over the decision, the NC spokesperson said it was "unjust and unfair" to levy taxes on people when the highway was not yet fully functional.

"The state government must do an immediate review of the rates that are being levied on different vehicles at the newly inaugurated toll plaza. We therefore urge the governor administration to defer imposing the toll tax," Dar said.

The PDP also pitched for the exemption of toll tax being levied on the vehicles in south Kashmir, stating that such a measure would hit the already economically downtrodden people hard.

The party's vice-president Abdul Rahman Veeri said people from south Kashmir in general, and from Kulgam and Anantnag districts in particular, were bearing the brunt of such a measure as private as well as the government employees have to pass through the toll plaza at Charsoo and they were being asked to pay every day.

"The government must exempt the people of south Kashmir and those employees who will have to report everyday to their duties and for that reason have to pass through the toll plaza. This is nothing but an octroi being levied on the people's movement. The government has to roll it back," Veeri said.

"The move is an indirect attack on the special status of state and also a brazen attempt to further weaken the state economy. Paying taxes is no doubt duty of every citizen but first government needs to introspect the fact that J-K is passing through turmoil since long and government has itself failed miserably to provide better roads to the people of state," Rashid said.

He said before giving the NHAI permission to collect the toll tax, the government should have taken the consent of the state legislature and "by not doing so, the Centre is trying to impose its writ on the state in violation to the special status J-K enjoys," he said.

In a statement, Faesal hit out at the government for first closing the highway to civilian traffic for two days to allow smooth movement of security forces and then levying a heavy road tax "without realising the impact it would have on the local economy".

He called upon the government to bring in clarity as to how this new tax will be implemented in view of the concessions given to the state under the GST by which toll is to be collected at Lakhanpur only.

Faesal asked the government to understand the local sensitivities "in view of the ongoing turmoil and not make policies that are seen as deliberate attempts to harass Kashmiris".