The Prime Minister was given a standing ovation for his six months in office when he rose to address the BJP parliamentarians, said Union Minister Pralhad Joshi. 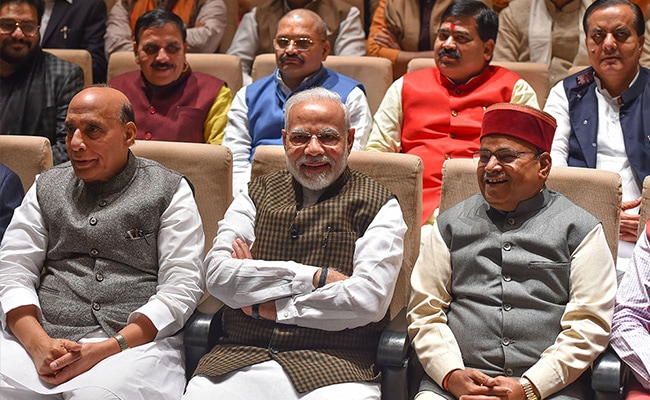 Prime Minister Narendra Modi urged BJP MPs to give a standing ovation for BS Yediyurappa, the Chief Minister of Karnataka, crediting him with the recent bypoll sweep that has firmly established the party's majority and stabilized its government in the southern state.

At a weekly meeting of BJP MPs at parliament, PM Modi expressed joy at the Karnataka win, leaders said.

First, the Prime Minister was given a standing ovation for his six months in office when he rose to address the BJP parliamentarians, said Union Minister Pralhad Joshi.

"PM Modi is very grateful to the people, he said there will be a lot of development in the state," added the Union Parliamentary Affairs Minister.

The BJP won 12 of 15 Karnataka seats for which bypolls were held last week. The winners were mostly defectors whose exit led to the Congress-Janata Dal Secular coalition crashing, clearing the way for a BJP government led by Mr Yediyurappa.

Mr Yediyurappa's gamble of fielding the Congress and JDS rebels despite resentment within the BJP paid off.

The BJP, with 105 MLAs, needed seven more for a majority in the 224-member Karnataka assembly (two seats are vacant).

On the day of the results, PM Modi called the BJP's win proof that people trust the ruling party when it comes to political stability. "The mandate in Karnataka was stolen through the backdoor by the Congress; people have now taught the party a lesson," PM Modi said at a rally in Jharkhand.