Arvind Kejriwal said, "I ask Modi Ji to remove all agencies and keep that poet on the job. He will tell who is a terrorist" 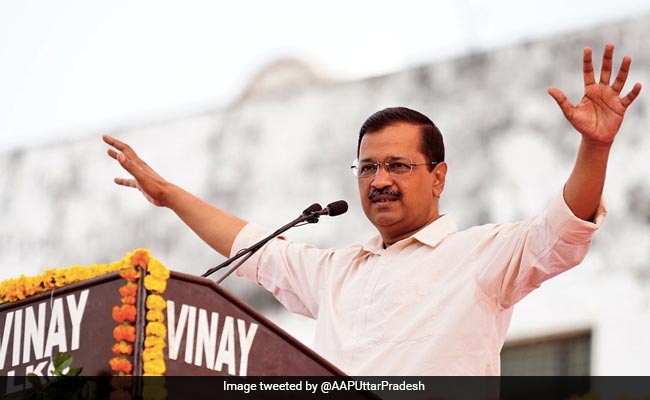 Arvind Kejriwal today said he is a "terrorist who scares the corrupt".

Delhi Chief Minister Arvind Kejriwal hit back at the Prime Minister Narendra Modi yesterday over his endorsement of aide-turned-critic Kumar Vishwas's comments, saying PM Modi should appoint him as a one-man force against terrorists. The reference was to Kumar Vishwas's claim that Mr Kejriwal wanted to be the Chief Minister of Punjab or Prime Minister of an Independent nation (Khalistan) -- which had set off a political storm last week.

Addressing a public meeting in Lucknow yesterday, Mr Kejriwal said, "BJP got raids conducted by all agencies but they did not get anything. When I asked, they said a poet from Ghaziabad had a dream that Kejriwal was a terrorist. I ask Modi Ji to remove all agencies and keep that poet on the job. He will tell who is a terrorist," reported news agency ANI.

At a rally in Punjab, PM Modi had advised people to take note of Kumar Vishwas's claim and said Mr Kejriwal and his party have the "same agenda" as Pakistan -- "to break India... to join hands with separatists to get power".

PM Modi's reference was to an interview of Kumar Vishwas with ANI, where he said, "One day, he (Mr Kejriwal) told me he would either become CM (of Punjab) or first PM of an independent nation (Khalistan)... he wants power at any cost".

Political rivals immediately picked on the claim, accusing the Delhi Chief Minister of being sympathetic towards separatists.

Congress's Rahul Gandhi, demanding that Mr Kejriwal respond to the issue, said "Kejriwal is not answering... because the founder of AAP (Kumar Vishwas) is telling the truth."

The Election Commission, which initially restrained the media from broadcasting the interview, calling his comments "provocative, communally divisive and inflammatory" later lifted its bar.

Quoting a dialogue from the blockbuster movie 'Sholay', Mr Kejriwal today said he is a "terrorist who scares the corrupt".

"There are two kinds of terrorists, one frightens the people while the other scares the corrupt. Kejriwal is a terrorist who scares the corrupt. There is a dialogue from Sholay movie..."Jab bachcha bhrashtachar karta hai toh maa kehti hai soja beta varna Kejriwal aa jayega (If someone indulges in corruption, the mother says- son go to sleep, or else Kejriwal will come)," he said.

Then, sharpening his attack, he said, "If BJP and Congress had worked in 70 years, they would have asked for votes in the name of work. Now they have to ask for votes by calling Kejriwal a terrorist". "First, the farmers of the country were called terrorists and now all the poor people using cycles are being called terrorists," Mr Kejriwal added.