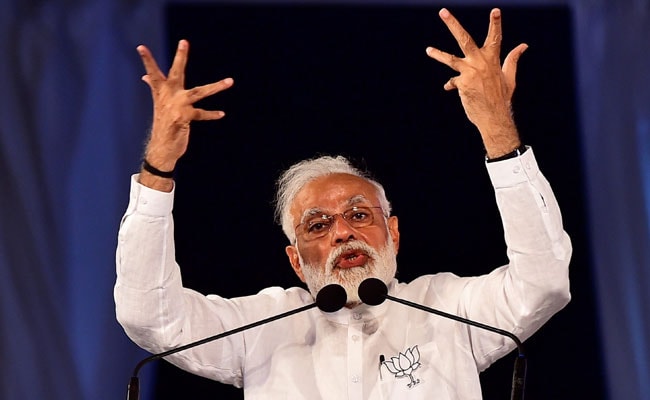 Earlier today, the Prime Minister had targeted the leaders of the other opposition parties.

Prime Minister Narendra Modi, targeted again by Congress's Mani Shankar Aiyar - this time by an article justifying his two-year-old "Neech" (vile) slur - retaliated through the day. From party chief Rahul Gandhi to senior leader Sam Pitroda and other opposition leaders (Mahamilavati people), he spared no one and said abuse from them was "a gift", since the people will answer.

For Mr Aiyar, whose slur came ahead of the Gujarat elections of 2017, the Prime Minister pointed to the results. Despite a tough fight, the Congress had lost the election.

The Prime Minister indicated that it was a consequence of Mr Aiyar's action. "Let me remind you that during Gujarat's elections, a senior minister of their government said that Modi is "neech". Someone said, he is from a "neech jaat" (low caste). And there was a storm in Gujarat," he said.

He also claimed the senior leader's two-year suspension from the party was a "drama". "They removed him from the party, but later, after a few days, they took him back again," he added.

On Tuesday, the Prime Minister had targeted the leaders of the other opposition parties. "These 'mahamilavati' people SP, BSP and the Congress, all are abusing me," he said. "Not a single day has passed when they have not abused me. This is their condition after the sixth phase of the election. I consider their abuses as a gift. I will not reply to them, you (public) will reply by voting for the BJP."

The last round of polling for the national election will be held on Sunday, when Congress-ruled Punjab and eastern part of the politically-crucial Uttar Pradesh will vote.

Mr Aiyar's opinion piece comes as the Congress is trying to put behind the controversy over its senior leader Sam Pitroda's "hua toh hua" (what happened, happened) comment regarding the 1984 anti-Sikh riots.

The remark had come as a gift for the BJP amid an increasingly bitter campaign. Yesterday, hours after Rahul Gandhi said Mr Pitroda should be "ashamed" of the remark, PM Modi had disagreed. It is the Congress chief, he said, who should be ashamed, claiming the party has shrugged off multiple instances of corruption, like the Bofors scandal and the AgustaWestland chopper scam, with a "hua toh hua" stance.

PM Modi said "When the relative of the rail minister indulged in corruption, Congress used to think 'hua to hua'... Right after the Punjab elections, Rahul Gandhi will hug his guru."

In his opinion piece published in the Rising Kashmir and reproduced by The Print, Mani Shanker Aiyar wrote, "Modi will, in any case, be ousted by the people of India on 23 May. That would be a fitting end to the most foul-mouthed prime minister this country has seen or is likely to see. Remember how I described him on 7 December 2017? Was I not prophetic?"