PM, Party Chiefs To Meet On June 19, "One Nation, One Election" On Agenda

Celebrations of 75 years of India's Independence in 2022, Mahatma Gandhi's 150th birth anniversary celebrations, ways to increase parliament productivity and development of aspirational districts are on the agenda. 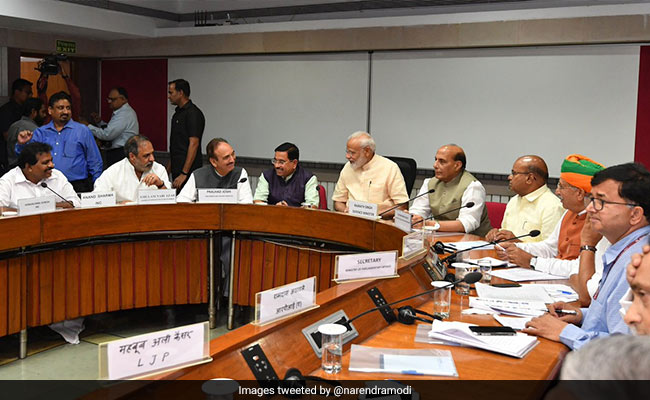 After his first all-party meeting today, PM Modi said it was a "fruitful session" (File)

Prime Minister Narendra Modi has invited party chiefs to a meeting on June 19 after chairing his first all party meeting today after coming back to power. "One nation, one election" and other important matters are on the agenda of the meeting to be held on Wednesday.

Celebrations of 75 years of India's Independence in 2022, Mahatma Gandhi's 150th birth anniversary celebrations, ways to increase parliament productivity and development of aspirational districts are other items on the agenda.

The meeting is scheduled in the parliamentary library building.

Wednesday's meeting will be followed by a dinner meeting with all lawmakers of both Lok Sabha and Rajya Sabha on June 20 to interact and exchange views with the government, Parliamentary Affairs Minister Pralhad Joshi said, adding that these two initiatives would go a long way in building team spirit among all parliamentarians.

After his first all-party meeting today ahead of the Budget Session, PM Modi said it was a "fruitful session".

We had a fruitful all-party meeting today, the first one after the election results and before the start of the Monsoon Session. Thankful to the leaders for their valuable suggestions. We all agreed on the smooth running of Parliament so that we can fulfil people's aspirations. pic.twitter.com/WhERafppKr

The first session of the 17th Lok Sabha will be held from June 17 to July 26.