PM Modi, addressing BJP workers, has said that the emergency was a "black spot" on democracy. 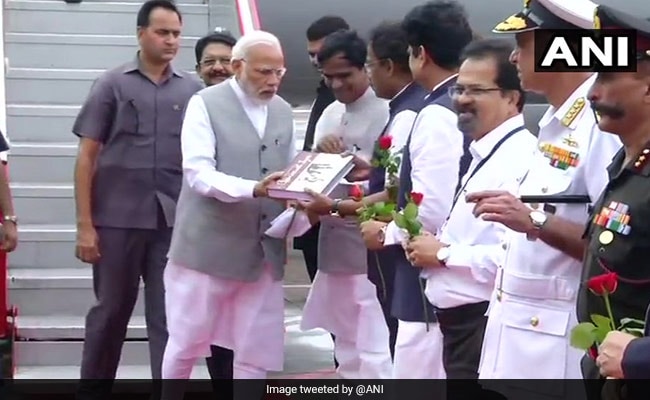 PM Modi's Mumbai Visit: PM Modi has arrived in Mumbai for the inauguration

PM Modi is now addressing BJP workers in Mumbai on the emergency and democratic values. PM Modi expressed gratitude towards those who fought against the Emergency in 1975.

The Mumbai unit of the BJP has organised the event, coinciding with the 43rd anniversary of the Emergency.

Here are the highlights for PM Modi's Mumbai Visit:

Jun 26, 2018 13:13 (IST)
"I salute the courage of all those great women and men who steadfastly resisted the Emergency, which was imposed 43 years ago. Their struggles ensured people power prevailed over authoritarianism and the stifling of civil liberties," PM Modi said.
Jun 26, 2018 13:13 (IST)
"India remembers the Emergency as a dark period during which every institution was subverted and an atmosphere of fear was created. Not only people but also ideas and artistic freedom were held hostage to power politics," Donald Trump tweeted.
Jun 26, 2018 13:11 (IST)
"The Congress has always cared only for their vote bank. They care for nothing else. For example, we (BJP) are putting an end to triple talaq, because for us the Constitution is prime. It allows equal rights for all individuals, all women. So we, the BJP, do not want the oppression of women of any religion, or caste. But Congress, they have always been and are against things like triple talaq, because they do not want to upset their "vote bank", those who keep the 'family' in power," PM Modi said.

"While Congress tries to create doubt, insecurity and fear in the minds of people, we (BJP) always try to keep the faith, build trust and belief in the minds and hearts of people," he added.
Jun 26, 2018 12:36 (IST)
PM Modi mocks Congress for finding fault with functioning of the Election Commission of India and EVMs; says this stance result of that party's decline from 400 seats to 44 in Lok Sabha polls, according to news agency PTI.
Jun 26, 2018 12:32 (IST)
"Massive" number of leaders were put in jail during Emergency: PM Modi
"I remember the time (of Emergency) when massive number of leaders were put in jail. BJP leaders were among those jailed too... But we, along with many many other political parties and their leaders came together to save and restore democracy," PM Modi said.
Jun 26, 2018 12:32 (IST)
Congress only focuses on creating the "fear of unknown": PM Modi
"The Congress only focuses on creating the 'fear of unknown'. They keep saying that Jan Sangh and RSS would kill Muslims... now-a-days they keep saying RSS will kill Dalits... all for creating a fear psychosis among the citizens... We are a big nation with a massive population, and such fear psychosis does have an impact on the people," PM Modi said.

"Fear, doubt and insecurity is what is spread by them (Congress), because it benefits them in keeping the "family" rule over the people," he said.
Jun 26, 2018 12:30 (IST)
"When Kishore Kumar refused to sing at a Congress function, his songs were banned": PM Modi
"Such was the arrogance of the Congress and the 'family' that when Kishore Kumar refused to sing at a Congress function, his songs were banned from radio and television. Imagine the mindset of such a party," said PM Modi.
Jun 26, 2018 12:29 (IST)
"I salute journalists like Ramnath Goenka, others": PM Modi
"I salute journalists like Ramnath Goenka, others for fighting for their right and emerging triumphant," said PM Modi.
Jun 26, 2018 12:27 (IST)
"Do not need to remind media houses on what had been done (by Rajiv Gandhi): PM Modi
"You all know what Rajiv Gandhi had done with the media, and how impositions were made on them... I do not need to remind the media houses of this country what had been done," said PM Modi.
Jun 26, 2018 12:26 (IST)
Attacking the Congress, PM Modi asks, "Do you think institutions in our great nation can ever remain free, safe and independent under their (Congress) leadership?"
Jun 26, 2018 12:25 (IST)
"When they faced the reality of going from 400 to 40, they could not digest the fact. What happened next? The election commission was questioned, the process and infrastructure of the EC was challenged. They created fear, doubt and insecurity among the belief of the people. All because one "family" could not accept the reality," said PM Modi.
Jun 26, 2018 12:17 (IST)
"When Congress and particularly "this family" feel that power is slipping out of their hands, they try to create fear in the country that only they can rule," says PM Modi.
Jun 26, 2018 12:17 (IST)
"When a notice was served to the 'family', such was the arrogance, such was the ego, that even the CJI was not spared... an impeachment motion was taken against him in Parliament. Because, for the Congress, nothing, no one and no institution comes above the 'family'," said PM Modi.
Jun 26, 2018 12:16 (IST)
"Congress creates insecurity in the minds of people," says PM Modi
"After God, people of this country have faith in the judiciary, but the Congress plays on this, creates insecurity and doubt in the minds of people... and there are always those who are happy to sensationalise it (gaana bajane waale toh mil hi jaate hain)," PM Modi said.
Jun 26, 2018 12:14 (IST)
"Those who speak of protecting the Constitution turned the country into a jail for the sake of "one family" by imprisoning prominent opposition leaders during Emergency," PM Modi said.
Jun 26, 2018 12:13 (IST)
"If things are in accordance with them, then all is fine, if not, then all is in under threat... be it judiciary, election commission or other institutions," PM Modi said.
Jun 26, 2018 12:12 (IST)
"In our history, whenever the Congress, especially the "family" feels their chair of power is about to go, they start spreading all sorts of lies... they say that the country is living in fear and intolerance, and only they (Congress) can fix "problem"... It is all a big lie," said PM Modi.
Jun 26, 2018 12:12 (IST)
India was turned into a jail: PM Modi
"India was turned into a jail... how much the constitution was misused and abused," PM Modi said.
Jun 26, 2018 12:11 (IST)
"The youth of today enjoy freedom, they do not understand what it is to live without freedom. Hence they probably do not feel the pain and the anger of Emergency," PM Modi said. "Only a man who is thirsty understands the value of water," he said.
Jun 26, 2018 12:06 (IST)
At a BJP function in Mumbai, PM Modi has started to talk about the emergency.
"We observe this day as a 'black day' not just because of what happened decades ago, but to make the youth of today aware of what had happened. It is important to know what had happened," he said.

PM Narendra Modi arrives in Mumbai, he would be attending the annual meeting of Asian Infrastructure Investment Bank and will also address party workers later pic.twitter.com/BGEqaNlplw