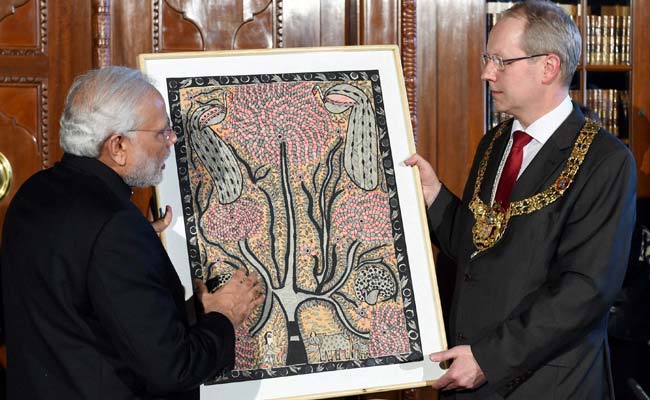 PM Modi, who is on a visit to Germany, was welcomed to Hannover by the mayor at a brief ceremony.

A prime minister's office release said that the painting has been painted on canvas by a 70-year-old national award winning artist, Baua Devi, and depicts various stages of life, association with nature, as also the interconnected nature of life on earth.

The Madhubani style of painting refers to the rural art form developed by women from Mithila area in the eastern Indian state of Bihar. The painting is done with fingers, nib-pens, twigs and matchsticks, generally using natural dyes and pigments, and is characterized by eye-catching geometrical patterns.

"Most Madhubani paintings depict man and his association with nature, and scenes and deities from ancient epics. Natural objects, plants, social events are also represented in these paintings. There are paintings for each occasion and festival," the release said.