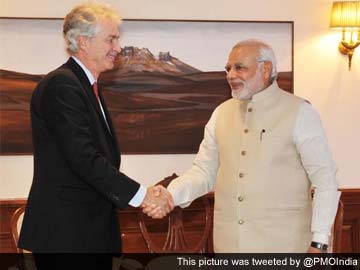 New Delhi: Prime Minister Narendra Modi has accepted a formal invitation from President Barack Obama to visit the US in September this year.

President Obama, who had earlier invited Mr Modi during a conversation on the phone to congratulate him on his win in the general elections in May, has sent a letter of invitation with US Deputy Secretary of State William Burns, who is visiting India.

Mr Modi met Mr Burns today and said he "looks forward to a result-oriented visit to the US with a concrete outcome that imparts new momentum to strategic partnership," Press Trust of India reported.

Mr Burns, who had met External Affairs Minister Sushma Swaraj and Finance Minister Arun Jaitley yesterday, said President Obama looked forward to meeting Prime Minister Modi in September and that it would be a "valuable opportunity" to renew the strategic partnership and spur trade between the two countries.

The visiting US official said that the Modi-led BJP had won a very a strong mandate to invigorate India's development and its rise on the world stage. "America has deep stake in India's success and PM Modi's success. As the world's two largest democracies and two of world's largest economies, USA and India share stake in each other's success. Our partnership can contribute enormously to a safer world," he said.

In May this year, Mr Obama was one of the first few global leaders to call up Mr Modi after the general elections results revealed that he had won a massive mandate. He had congratulated him on his "emphatic election victory."

Promoted
Listen to the latest songs, only on JioSaavn.com
It was the first high-level contact between Mr Modi and the US leadership ever since Washington denied the former a visa in 2005, citing the 2002 riots in Gujarat, of which Mr Modi was chief minister till he took over as the country's Prime Minister.