Justifying building of memorials for various noted personalities, PM Modi said it is a sign of devotion towards those who have fought for the freedom of the country. 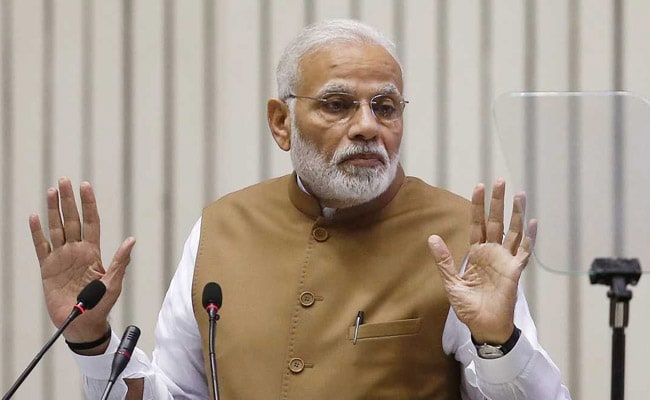 In a veiled attack on the Congress, Prime Minister Narendra Modi on Sunday said the opposition party can abuse him, but should stop "belittling" icons like Mahatma Gandhi, Vallabhbhai Patel and Babasaheb Ambedkar.

The prime minister also said cleanliness was an important aspect of Mahatma Gandhi's life and asserted that sanitation coverage increased manifold under his four-year-old government.

Without mentioning the Congress, PM Modi said the opposition party is tied to a single family. "People see caste, state, election... Stop belittling great personalities. Modi is living, abuse him 24 hours, and if that is not enough, do it for 26 hours. Who is saying no?" he asked.

Congress president Rahul Gandhi on Thursday claimed that Sardar Patel's mega statue in Gujarat was being built by China, evoking stinging reactions from the BJP and the Gujarat government.

Justifying building of memorials for various noted personalities, PM Modi said it is a sign of devotion towards those who have fought for the freedom of the country.

He said the country's first deputy prime minister was a global figure who cannot be confined to a caste or a state.

"People say that we remember Sardar Saheb due to the elections. Some say he was a Gujarati while others see him representing a particular caste. "He was a global figure and they have belittled him. It is our responsibility to make him known to the world as he has worked for the country's unity," PM Modi said.

The prime minister was addressing a gathering in Rajkot from where he inaugurated through remote control the Mahatma Gandhi Museum at the Alfred High School in the city where the father of the nation had studied.

PM Modi also dedicated over 600 houses built under the Pradhan Mantri Awas Yojna (PMAY) to the people and interacted with some women beneficiaries through video conferencing.

In his speech, he appealed to the opposition not to belittle great personalities of the country.

"In reality, this land of Rajkot shaped (Mahatma) Gandhiji's life... It is the right of every person of this country and the world to know the early life of this global leader.

"But, I don't know why, and for whose benefit, a great personality like Mahatma Gandhi was reduced to just paying tributes on October 2 (his birth anniversary) and January 30 (his death anniversary)?" PM Modi asked.

He said the museum is of immense importance not only for the people of Rajkot but also for the entire world.

The museum has been set up at the Alfred High School, which was an important part of the formative years of Mahatma Gandhi. It will help spread awareness about Gandhian culture, values and philosophy, he said.

Attacking the Congress without naming it, PM Modi said, "We are not tied to one family. We believe that every great person is an inspiration for the coming generation. We are committed people."

"Shyamji Krishna Varma, whose birth anniversary is on October 4, had fought for the country's independence. If we made his statue... It was our aim that those who fought for country's freedom should become a source of inspiration for the coming generations," he said.

"When I constructed the 'Panchteerth' by remembering Babasaheb Ambedkar, I had faith that the coming generation gets inspired by a man who rose and achieved such height after coming out of poverty," the prime minister said.

Panchteerth consists of five places that are closely associated with the Dalit icon and are being developed by the government.

"We have constructed a monument of former president and 'Missile Man' A P J Abdul Kalam at his hometown Rameshwaram so that the visitors there can seek inspiration from him.

"As part of this exercise, we are constructing Sardar Vallabhbhai Patel's statue (in Gujarat's Narmada district. Sardar Saheb's stature is so high that it cannot be compared, but symbolically we have decided to keep the height of the statue (at 182 meters) which is twice the height of the world's tallest statue. On October 31, I will come to inaugurate it," he said.

Referring to the United Nations' 'Champions of the Earth' award given to him, PM Modi said the deserving candidates for this honour are Mahatma Gandhi and 125 crore Indians.

PM Modi has been awarded the 'Champions of the Earth' Award, the UN's highest environmental honour, along with five other individuals and organisations for their leadership in promotion of solar energy.

He said he received the award at a time when India is celebrating 150th birth anniversary of Mahatma Gandhi.

As a gift to Mahatma Gandhi and his dream to see India a clean country, PM Modi urged the people of Rajkot to make the city cleanest in India.

He said the sanitation coverage has increased in the last four years under his government.

"Sanitation coverage in the country before 2014 was mere 35 per cent. Though many PMs and governments came, it remained just 35 per cent.

"In the four years of the NDA government, it has increased to 95 per cent. This is not a small feat," he said.

"Cleanliness was an important aspect of Gandhi's life and he used to say, if he had to choose between cleanliness and freedom, he would choose cleanliness first, such was his commitment towards cleanliness," he said.

Every Indian should have it in their hearts that a barrister (Gandhiji) gave up everything for the country and freed it from foreign rule, Modi said.

"The UN has said 3 lakh children were saved due to the cleanliness movement (of the NDA government). What bigger humanitarian work can there be?" he asked.