PM Modi shared an embrace with UAE President Mohamed bin Zayed Al Nahyan, who met him at Abu Dhabi airport, according to a tweet by the foreign ministry spokesperson. 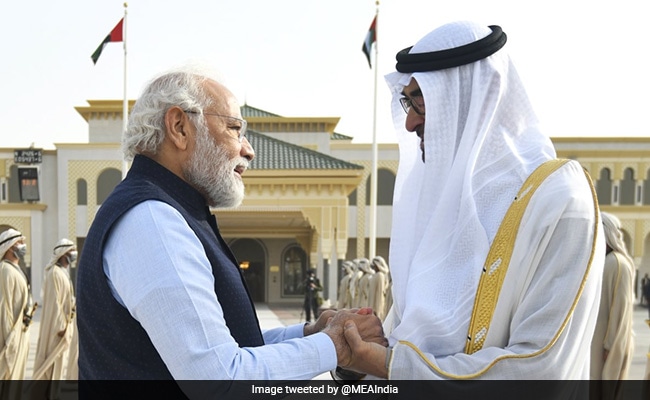 Prime Minister Narendra Modi arrived in the United Arab Emirates on Monday, just weeks after a top official's remarks about the Prophet Muhammad set off anger in the Gulf.

PM Modi shared an embrace with UAE President Mohamed bin Zayed Al Nahyan, who met him at Abu Dhabi airport, according to a tweet by the foreign ministry spokesperson.

"I am touched by the special gesture of my brother, His Highness Sheikh Mohamed bin Zayed Al Nahyan, of coming to welcome me at Abu Dhabi airport. My gratitude to him," PM Modi tweeted.

The one-day visit by PM Modi, who is heading back to India after attending the G7 summit in Germany, follows protests by Gulf states earlier this month after a spokesperson for his party made disparaging remarks about the Prophet Muhammad on TV.

The UAE and Saudi Arabia condemned the comments, while Qatar and Kuwait summoned their Indian ambassadors. One Kuwaiti supermarket took Indian goods off its shelves.

The remarks were also blamed for clashes in India and prompted demands for her arrest.

The Foreign Minister said PM Modi's visit was to convey his sympathies to Sheikh Mohamed -- whose brother, former president Sheikh Khalifa bin Zayed, died in May -- and his congratulations on taking over as leader.

The two countries enjoy strong trade and cultural ties, with Indians making up 35 percent of the UAE's 10 million population, the biggest expatriate community.

India-UAE trade is valued at $59 billion, making the oil-rich Gulf country India's third largest trading partner for the year 2019-20 after China and the United States, according to the foreign ministry.

In February, the two countries signed a Comprehensive Economic Partnership Agreement to boost trade and investment.